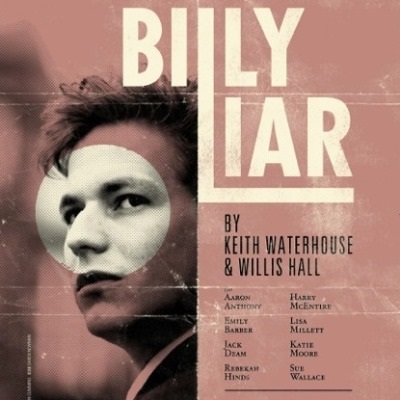 Harry McEntire takes the lead role in a new production of Billy Liar, a classic tale of northern life in the 1960s.

Keith Waterhouse’s original 1959 novel has been adapted for the stage by Waterhouse himself, alongside Willis Hall.

With previous Royal Exchange credits that include Winterlong (which also played at Soho Theatre) and Punk Rock (also at the Lyric Theatre ,Hammersmith), McEntire takes to the stage this time as 19 year old Billy Fisher – a teenager whose great imagination helps him to escape the drudgery of his everyday life.

Billy works a dead end job in an undertakers and lives at home with his parents and grandmother, however this young northern lad has big dreams – to run away to London and become a scriptwriter.

The play is set over one hectic Saturday, when a series of explosive, emotional confrontations take place, all set off by Billy’s lies, and his dreams of getting to London are put in jeopardy both by his own romantic affairs and fears and the expectations of his family.

Stockport-born Sam Yates is guest director for the production and commented, “Billy Liar is a sometimes painfully truthful insight into northern family. The unmatchable intimacy of the Royal Exchange makes it the ideal home for this play. I’m thrilled to be working with one of Britain’s most exciting young actors, Harry McEntire, who plays Billy Fisher.”

Yates featured in GQ Magazine’s “Men Of The Next 25 Years” in theatre in 2013 and was named a rising star in The Observer this year. His other recent credits include Cornelius (Brits Off Broadway, New York and Finborough ), Mixed Marriage (Finborough) and Poetry Week (Donmar Warehouse).

Online information and a trailer can be viewed at http://www.royalexchange.co.uk/billyliar