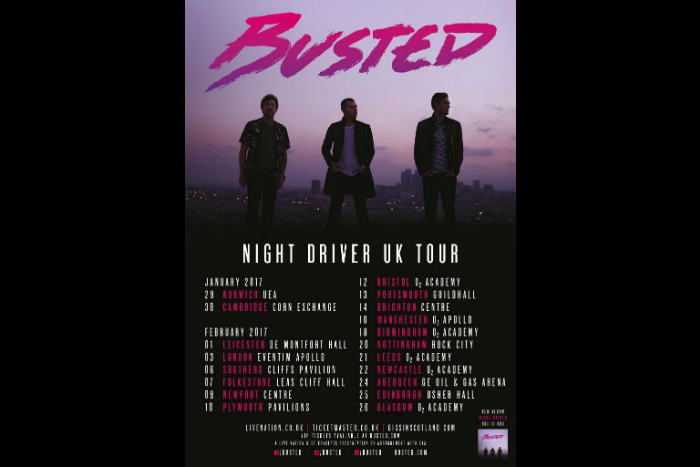 Busted are set to perform at Manchester’s O2 Apollo during their 2017 Night Driver UK and Ireland Tour.

The announcement comes after the band released their first single in over a decade, On What You’re On.

Speaking of the 21-date tour which launches in Norwich on 29 January and release of forthcoming third album Night Driver on 11 November, Charlie commented “We can’t wait wait for people to hear this song and be able to share what we have been working so hard on for the past twelve months.”

Once in the studio, the two-time BRIT Award winning trio discovered they each had a fresh perspective both personally and musically. “As soon as we started making music it became very apparent that we all wanted to make exactly the same thing,” Matt says. “That’s what made it so easy. Once James got on the Juno-60 we were like, ‘this is the sound of our record, this is exactly the kind of record I wanna make’.”

“The last thing we wanted to do was try to recreate what we used to have,” says James. “It belongs to that time. All real artists evolve, all real artists try things, it’s unnatural not to.”

Tickets for Busted performing at Manchester’s O2 Apollo on 16 February 2016 go on sale at 9am on Friday 14 October priced £29.50 plus booking fee.