We ate a 24karat gold leaf burger … and we liked it! 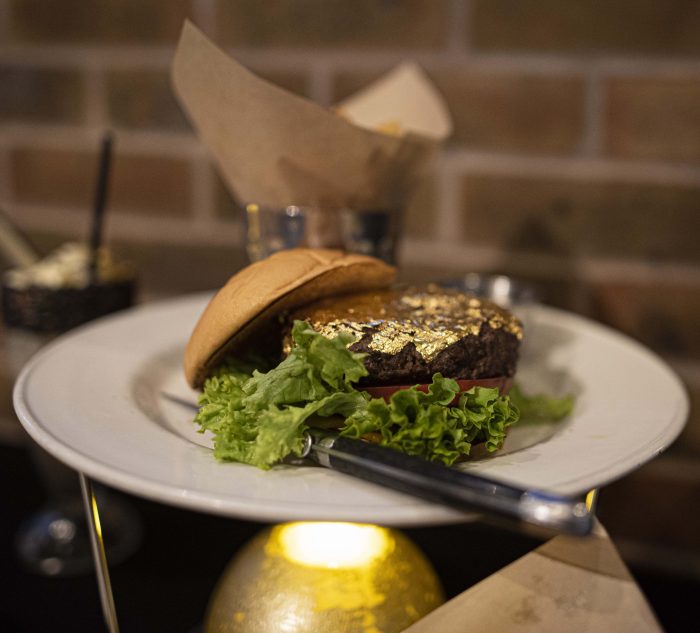 It’s not something that you see on many menus, but Hard Rock Cafe Manchester are now serving a 24 karat gold leaf steak burger … and it’s delicious.

We reported that The Hard Rock Cafe at Manchester’s The Printworks was overhauling its menu.  So we went along to give it a try – gold leaf steak burger, boozy shakes, vegan burger, buffalo sliders and anything else that we could possibly manage.

After putting away several spring rolls, dripping with Monterey Jack cheese sauce and Tupelo chicken tenders to get us in the mood (we can’t resist our old favourites!), we turn our attention to the new menu – after all that’s why we are here.

We start with the buffalo-style sliders.  Mini burgers, coated in a delicious, spicy sauce.  As I look at them, I can only think “There’s nothing mini about this.”  I’m undaunted and take my first bite.  It’s delicious.  The dressing certainly packs a punch – leaving my taste buds dancing to a beat only matched by the live music at the venue.

So far so good, the Hard Rock’s new menu is all positive. 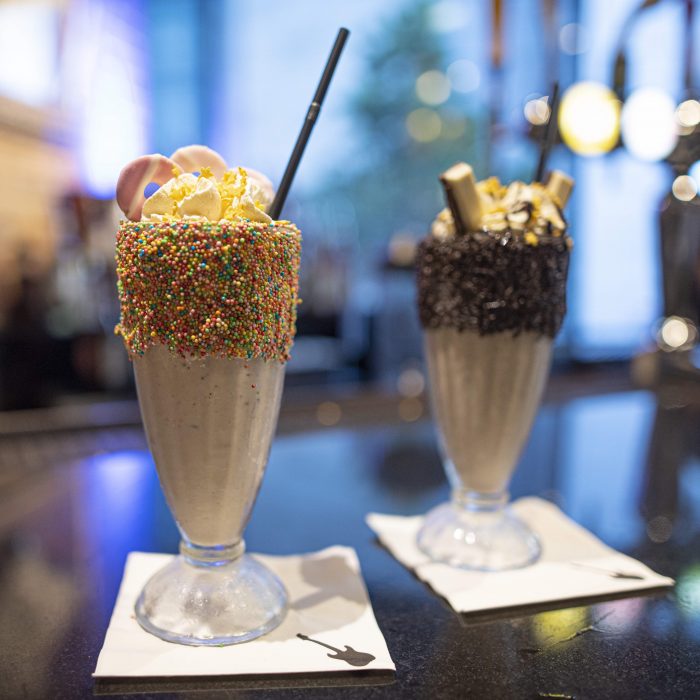 And now the shakes have a chance to shine with a shake making demonstration taking place over at the bar.  The Hard Rock has introduced several new varieties including Strawberry Cheesecake and of course, the cookies & cream boozy milkshake.  In fact as I watch the cookies & cream shake being put together I have to recompose myself.  Ice-cream, white chocolate, oreo cookies, whipped cream, chocolate oreo churro and vodka are all finding their way in to the glass.  A little drool may have found it’s way on to my chin.

When it comes time to sample them, I take a run at each (it’s a hard life).  The strawberry cheesecake mini-milkshake hits the spot – ice cream blended with strawberry and cheesecake topped with white chocolate, whipped cream and frosted animal crackers.  But it’s the cookies and cream boozy milkshake which wins for me.  Self control is the key I keep telling myself, adamant that I shouldn’t overindulge.  Go on then, one more.

In truth, I’m feeling a little full now and I haven’t tried the 24 karat gold leaf steak burger yet.  I save a little space when the next slider comes round, although my colleague Michelle doesn’t hesitate and then delights in telling me how good it tastes.

Instead, I make my move on the 24 karat gold leaf steak burger (incidentally so does she!).  As I bite in to it, I immediately taste that this is a cut above many of the other burgers found around Manchester.  Let’s face it, there are burgers in pretty much every other restaurant these days.  But this is tender, moist, filled with flavour.  I must admit that I had thought that the gold leaf may distract slightly from the taste, and may perhaps be a bit gimmickery, but it doesn’t.  The steak burger is an abolute winner.

It had been a little while since I had visited the Hard Rock … it won’t be so long until I’m back there again though.