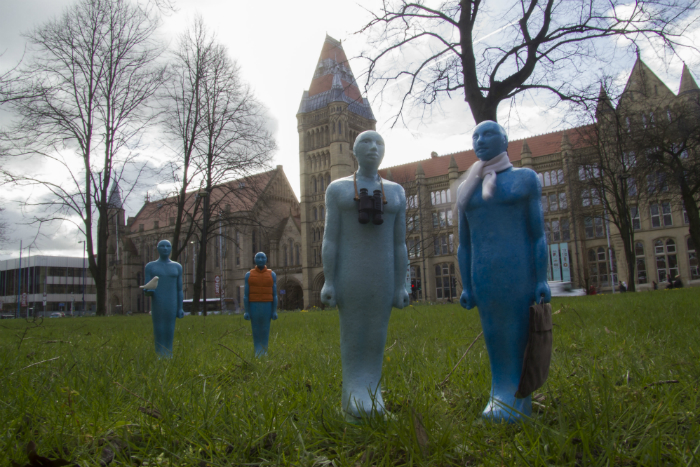 The commission, a response to the current political debate on the subject of migration, places a multitude of his faience ceramic ‘Nu’ Shabti figures in new and unexpected contexts, many suspended as if floating in the main Ancient Worlds gallery space. The focus of the installation is to reflect the experience of migrants on a boat travelling across the Mediterranean towards a new existence.  The installation follows the recent news that Manchester Museum has purchased a refugee’s life jacket.

Zahed Taj-Eddin, who was born in Aleppo and has a special interest in history and ancient art, was inspired particularly by Manchester Museum’s extensive collection of Egyptian shabti figurines, which were placed in large numbers in tombs to act as servants for the afterlife. He has previously created 99 ‘Nu’ Shabtis for popular shows at the Victoria and Albert Museum and Petrie Museum of Egyptian Archaeology.

Speaking of the display, Zahed commented, “For this new installation I decided to suspend my ‘Nu’ Shabtis in the Museum galleries. They are taking a new journey into time and space; suspended between the past and the present, searching for a new truth, different from the one they were made for. The display invites visitors to think about ancient and modern human issues such as the beliefs and actions that lead us to venture into the unknown and explore a better life beyond.”

Discussing the political context and reasoning behind the installation, which is accompanied by a display of more than 250 ancient examples from one of the world’s most important collections of shabtis, Dr Campbell Price, Curator of Egypt and Sudan, said: “Our aim in working with Zahed has been to address contentious social questions through the lens of archaeological collections; to use seemingly familiar objects and provoke discussion of big contemporary topics. Zahed’s sculptures are both serious political commentary and enthralling objects in their own right.”