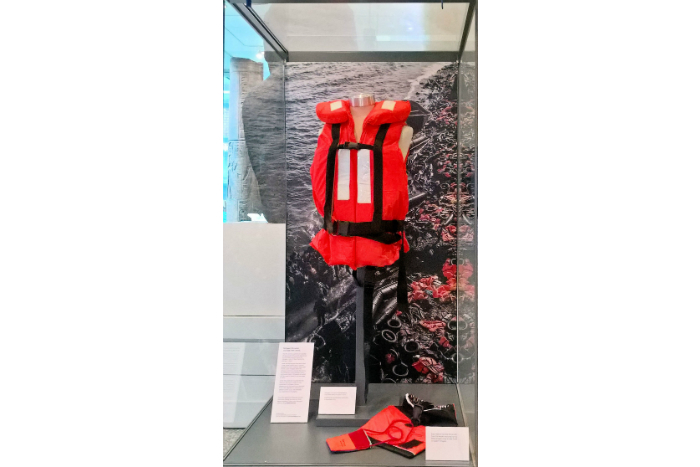 Manchester Museum has acquired a refugee’s life jacket, which is now on display in the entrance to the museum.  In doing so, Manchester Museum is seeking to engage visitors with one of the major issues of our time, migration, which has been cited as a major factor in the referendum and US presidential election.

Migration is also one of the central themes of Manchester Museum’s new ‘Collecting Life’ project. Bryan Sitch, Curator of Archaeology, visited the Greek island of Lesvos in December 2016 to collect a refugee’s life jacket from the Mytilene municipal authorities. Whilst there, he recorded a number of interviews with people trying to help refugees, and in Manchester he interviewed a recent refugee from Syria about his experience of crossing the Mediterranean.  The life jacket and the interviews can now be seen in the entrance to Manchester Museum. 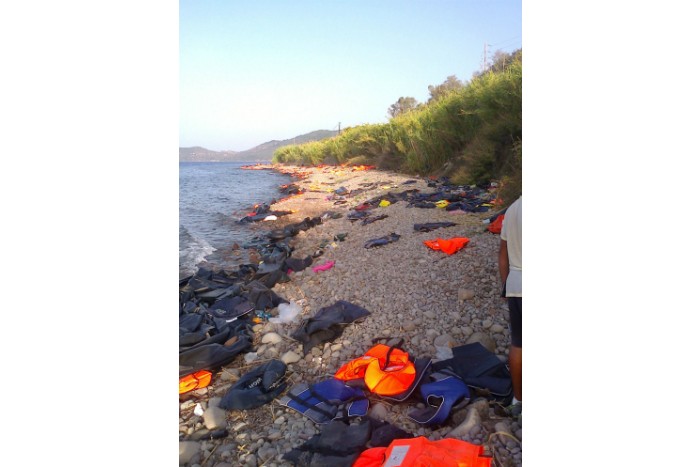 The life jacket, which is now on display at Manchester Museum, symbolises the movement of people in a uniquely evocative way and evokes mixed responses. However, this is an environmental as well as a humanitarian issue because of the large number of plastic life jackets, inflatable vessels and outboard motors abandoned on Greek islands such as Lesvos, Chios and Cos. Many of the life jackets have been gathered from the beaches (such as those shown in the image above, scattered on the shore of Lesvos) and some are being recycled to make into bags. Manchester Museum’s display shows two bags made in the Mosaik workshop in Mytilene on Lesvos. The proceeds from the sale of the bags are used to help refugees.