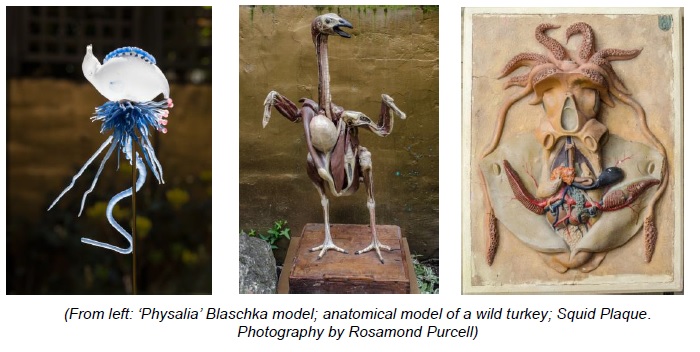 The private collection of prolific art collector George Loudon is set to go on public display for the first time at Manchester Museum as a part of the museum’s Object Lessons exhibition.  The display will feature his collection of 19th century life science teaching objects showing the natural world through the eyes of a Victorian scientist.

With a collection of bizarre objects running into more than 200 artifacts, the objects include Blaschka glass models, early lithographs of the Grand Canyon and some of the first recorded imagery of the Aurora Borealis.  These items were first curated in 2015 for his book Object Lessons: The Visualisation of Nineteenth-Century Life Sciences.  Now, the collection will be explored at Manchester Museum through seven themes:

Craftsmanship will pay particular attention to the highly-acclaimed Blaschka glass models, created by German glassworkers Leopold Blaschka and his son Rudolf. These incredibly detailed models of soft-bodied animals allowed 19th century scientists to record these fascinating creatures at a time when underwater photography was not yet available.

In Understanding the Body models are used to explore the shape, movement and function of the body. A life-size papier-mâché anatomical wild turkey will sit alongside an exploded cod skull and early German models used to teach the bite of a rattlesnake.

Recording the Extraordinary will focus on ways to record unusual things that are difficult to describe in words: real phenomena at the edge of make-believe, folklore and fantasy. Early illustrations of the Aurora Borealis (the Northern Lights) near Cambridge in 1847, will sit alongside a plaster moon crater and a globe of the stars.

Exaggerated papier-mâché flowers and an Edwardian pop-up human anatomy book form part of Looking Inside. This section celebrates the importance of plant and animal models and how they were essential to properly understanding how they worked during the Victorian era.

Teaching Museum takes an overarching look at the context in which these models were created. It will explore how these artifacts and illustrated posters were invaluable in teaching life science in the 19th century. Highlights include Japanese teaching scrolls from 1843 and wax fruits.

Minute details of plants and animals, as well as microscopic creatures will be on display in Revealing the Microscopic including Early French flea photographs and models of pollen and penicillin.

Framing Time will explore the vastness of time and how life might have existed in the past. Some of the first illustrations of the Grand Canyon from the 1870s will be shown alongside early reconstructions of long extinct fossils.

Loudon’s collection is set to be displayed alongside other pieces from Manchester Museum and the World Museum, Liverpool from 19 May – 20 August 2017.