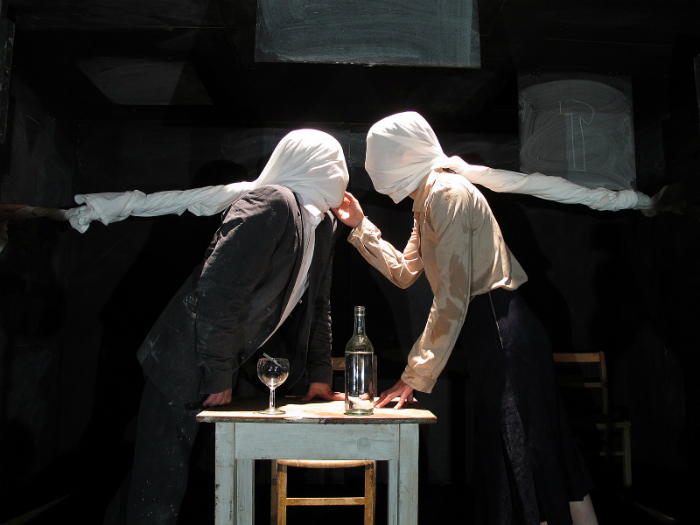 Reckless Sleepers return to Manchester’s Contact in May to present a performance of Schrödinger.  The UK/Belgian company is a group of individual artists who specialise in theatre making with additional expertise in dance, performance, visual art and designed.

Schrödinger is inspired by the scientist Erwin Schrödinger who won the Nobel Prize for his contribution to Quantum Mechanics in 1933 for theorising a box in which a cat exists as both living and dead at the same time.  Reckless Sleepers first performed Schrödinger almost 20 years ago, but the story remains as relevant today as it was then.

The piece takes place entirely in a black wooden room filled with trap doors and hidden entrances. A group of performers tries to get a grip on what is happening. But no-one quite knows who is in control or what the rules are, each performer conducting some kind of social experiment on the rest of the group.

The performance presents a vision of society constantly in flux, where it’s impossible to know who really has power. Relationships and allegiances emerge and then vanish and the piece constantly threatens to descend into chaos or farce.

Speaking of the production, Mole Wetherell, Artistic Director of Reckless Sleepers commented, “I couldn’t leave the project Schrödinger alone over the past 20 years, the central themes of this performance are still resonant and it’s important that people have the opportunity to experience this project for the ﬁrst time. To call it a remake would be wrong as this new version of Schrödinger works with a different group of artists and Reckless Sleepers have changed the way in which they perform. The structure however, the box which is essentially the 6th performer, is the only constant. The doors, hatches, walls, exits and entrances are in the same place. But the people who occupy it will have changed. Like the spaces that we perform it in, the cities that we visit will have gone through a transformation.”

When and where is Schrödinger performed in Manchester?

Reckless Sleepers perform Schrödinger at Contact, Manchester, on Wednesday 24 and Thursday 25 May at 8pm.  Tickets £15 (£10 concessions).