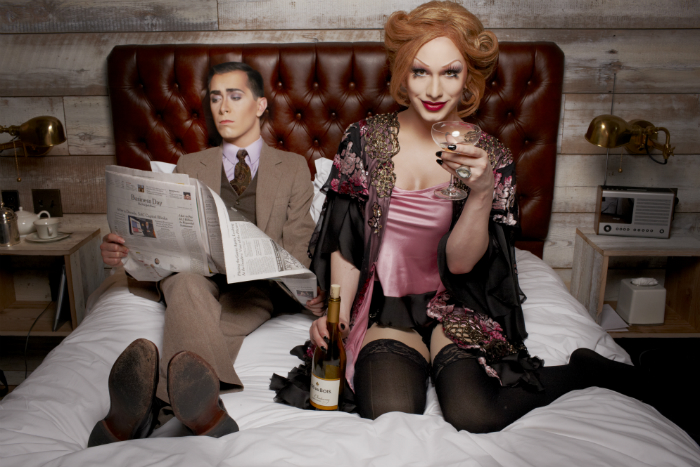 Jinkx Monsoon returns to Manchester’s Contact with The Vaudevillians after an often-extended Off-Broadway run, an Australian tour and a run at London’s Soho Theatre.

The winner of RuPaul’s Drag Race, Jinkx Monsoon, is the sassy alter ego of Portland born entertainer Jerick Hoffer.  He comes back to Manchester with the bawdy, rowdy musical comedy which co-stars composer and musician Major Scales, the evil twin of Richard Andriessen, a musician, writer and performer based in Seattle. He has written everything from award-winning New York shows on the east coast to music for amateur adult films on the west.

What is The Vaudevillians about?

Throughout the 1920s Kitty Witless and Dr. Dan Von Dandy toured the United States as The Vaudevillians, wowing audiences with their edgy, original music. One day, while touring through Antarctica, they were victims of a devastating avalanche and were buried under two tons of sleet and snow – instantly freezing them alive. But thanks to global warming, they recently thawed out only to discover that pop artists had stolen their music and passed it off as their own. Now, at long last, they are taking to the stage to reclaim their songs, performing their music as originally composed. It’s a vintage cabaret with a twist of drag.

Speaking of returning to Manchester, Jinkx Monsoon commented “I love performing in Manchester as the people are so friendly and fun. If I ever moved to the UK then I’d want to live in Manchester even for just a little while, because I love the city and the culture there. I’m very much looking forward to spending time back there in December”

Where and when is The Vaudevillians performed in Manchester?

The Vaudevillians is performed at Manchester’s Contact from 7-9 December.  Tickets are priced £25/20.