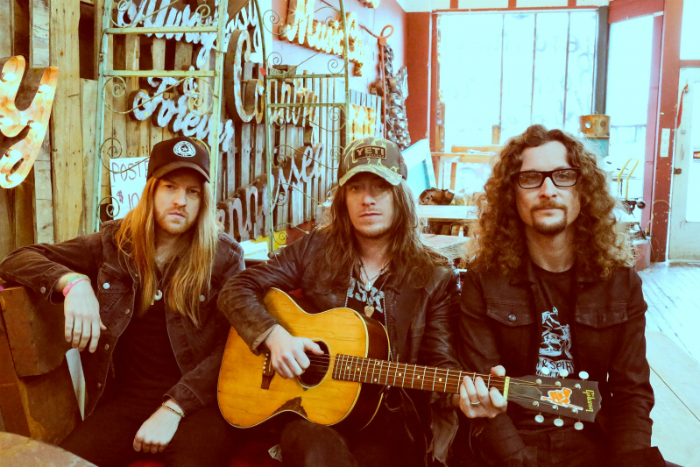 Masters in blending the weight of heavy music with the swagger of southern rock and the true grit of country, The Cadillac Three’s 2016 nine-date tour will be in support of their eagerly anticipated upcoming album – the follow-up to 2014’s critically acclaimed Tennessee Mojo – with more details to be announced soon.

The band have taken the US by storm with single ‘White Lightning’, which Rolling Stone also listed as one of the Best Country Songs of 2015 and have appeared on ABC’s hit drama Nashville as well as having their music featured on CSI Miami, Vampire Diaries and Hart Of Dixie. With a raw sound like no other, the buzz-worthy outfit organically builds around Neil Mason’s thundering, melodic percussion and the sinewy inter-play of Johnston’s gruff vocals and guitars with Kelby Ray’s lap steel and bass, all ready to explode at a moment’s notice.

Bold and electric, THE CADILLAC THREE has proven to be a musical force not to be ignored. Rolling Stone named their unconventional love jam “White Lightning” one on the 25 Best Country Songs of 2015. GRAMMY-nominated frontman Jaren Johnston penned the track as well as six #1 hits for other artists such as Keith Urban and Jake Owen. Some of the band’s highlights include Steven Tyler of Aerosmith joining the Nashville natives at their capacity hometown show; Eric Church enlisting them as major tour support; Dierks Bentley inviting the guys to rev up his Miles & Music fundraiser and finding big fans in Florida Georgia Line, Thomas Rhett and Eli Young Band. Additionally, they’ll be hitting the road with both Kip Moore and Chase Rice bringing an “unrefined live show you won’t want to miss” (PASTE) as the new year ignites. But, that’s just the start … in the US alone. On January 29, TC3 will “Graffiti” the musical landscape with a brand new song slated for simultaneous digital release in the US and Europe. “Graffiti” will impact radio as an official single in the UK on February 5, where they will also film an accompanying music video.

Percussionist Neil Mason penned the track with Corey Crowder and Luke Dick, which TC3 recorded at London’s famed Abbey Road Studios as part of a live vinyl release coming later this year. The lyrics echo nostalgia for the band who met in high school: “we’re doing it our way, leaving our mark down the halls, on the walls in the bathroom stalls, underneath that freight train bridge we jumped off // Our story spread around, word of mouth, town to town // we were small-town famous, our names in graffiti.”

The raucous trio has been building a rabid following with music critics and fans alike, already nearing a sell out on all dates already on their upcoming Night Life Religion Tour in the UK, which kicks off on January 28 in Leeds.

“Thank you for coming to the shows, listening to the tunes, telling your friends about us whether it’s good or bad and for letting 3 long hairs from Nashville, TN live the dream of playing music all over the world,” said TC3. “There will be new music and new adventures. We can’t wait to see y’all out there!”

Since being named the 2014 UK Classic Rock Roll of Honour: Best New Band, TC3 became the most played new band on Planet Rock in 2015 with several radio singles – ” The South,” “Back It Up,” “Party Like You, “Peace Love and Dixie” and “White Lightning” – listed on the UK’s biggest radio station dedicated to rock music while “White Lightning” was a staple all summer on the BBC Radio 2 playlist and an interview with host Bob Harris is slated for February 1 on his prime time Country show. A nonstop rollercoaster of touring around the UK release of their EP Peace, Love & Dixie resulted in every show boasting a sell out – including concerts at famous venues like O2 Academy Islington, Dingwalls and The Garage. On top of those, TC3 has also played three UK festivals – Sonisphere, Download & Planet Rock Fest. It’s no wonder fans in the grassroots TC3 Drinking Club have continued to raise a glass and engage beyond the live performances.

“Like Kings of Leon before them, they’re poised for their first big break in the U.K. — where they’ve sold out every headlining show for nearly two years — before conquering their U.S. home turf,” heralded Rolling Stone.

With a raw sound like no other, the buzz-worthy band organically builds around Neil’s thundering, melodic percussion and the sinewy intertwining of Jaren’s gruff vocals and guitar with Kelby Ray’s lap steel, all ready to explode at a moment’s notice. “The blazing brand of country rock plied by The Cadillac Three burns down genre boundaries” (The Boston Globe) and “…the majority of today’s so called country rockers are simply trying to emulate what The Cadillac Three has been from their very beginning” (Chicago Sun-Times). The musical co-conspirators are known for their high-energy shows and gritty sonic instincts, evident on a five-song electric session at the prestigious Abbey Road Studios that is slated for release later this year.