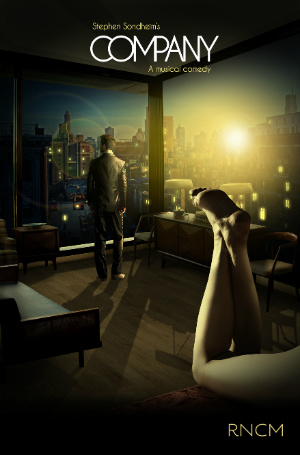 Company, dripping with humour, insight and a touch of neuroticism, tells the tale of New York bachelor Bobby (played by Joseph Dexter and Stuart Overington) as he approaches his 35th birthday, steadfastly adverse to a steady relationship and marriage, and the interactions with his best friends (all married couples) and his three girlfriends. This all takes place in a series of vignettes which show what really goes on behind the closed doors, the secrets people keep and the displays which are put on for the public, hiding the sometimes ugly truth. It is through this series of vignettes that Robert identifies what he wants from life and from a wife as his character develops from a carefree batchelor, enjoying the freedom of no responsibility to a man looking for that special someone.

Company was the first musical to focus on adult themes and relationships upon its release on Broadway in 1970. It was nominated for a record-setting 14 Tony Awards, winning six. It was based upon the book written by George Furth.

The production follows the success of the RNCM’s postgraduate Musical Theatre study option, with Stefan Janski (Head of Opera) commenting, ‘The tremendous success of our postgraduate Musical Theatre study option in recent years, and the enthusiasm from students has really influenced our decision to branch out from the operatic repertoire and broaden the student experience. The RNCM’s School of Vocal Studies and Opera thrives on offering the very best training and performance opportunities to aspiring young singers and instrumentalists. Today graduates need to be as versatile as possible, and in presenting productions such as this they are learning additional skills and techniques so essential to the industry.’

The show will be directed by Garth Bardsley, a Senior Lecturer (and indeed graduate) of the RNCM who describes Company as being ‘as provocative and psychologically penetrative as when it was garlanded with awards at its Broadway premiere in 1970’. Musical direction comes from Julian Kelly who has worked extensively in the West End and on Broadway with credits including Sweeney Todd, Chicago and West Side Story amongst many others, with costume and set designs by David Cockayne and choreography by Bethan Rhys Wiliam.

Company will feature students of the Royal Northern College of Music, and is dual cast featuring students of Vocal Studies and Opera.

Company will be performed at the Capitol Theatre, Manchester Metropolitan University School of Theatre from Wednesday 25 June to Friday 4 July. Tickets £15.