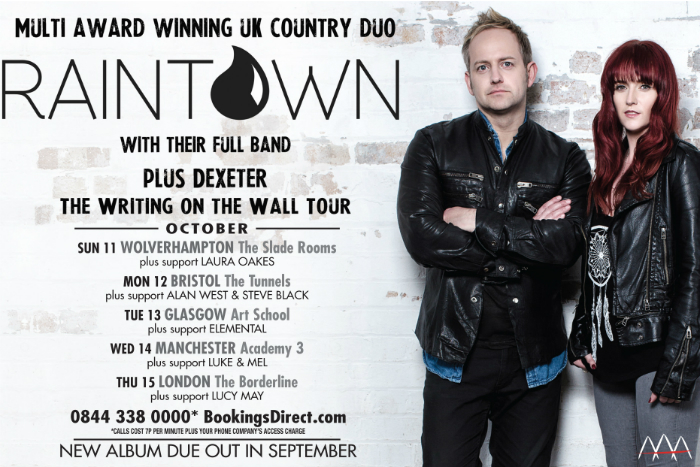 Glasgow-based country duo Raintown are set for a busy week with the highly anticipated second album Writing On The Wall set for release on 9 October and then a run of tour dates which sees the award winning group perform at Manchester Academy 3 on 14 October.

And the accolades may well continue.  Raintown’s latest album, fan-funded on PledgeMusic, twelve new tracks from Paul and Claire McArthur- Bain.  It’s an eclectic mix of lyrical stories, from country to guitar-driven pop. If This Was A Love Song with its strong, sing-a-long chorus is about promises and conversations between a couple on the fear of giving relationships a second chance, “It’s about finding the right words to say”, comments Claire. Missing You came in the aftermath of the Clutha Tragedy in Glasgow. “We were discussing how hard it would be to have the last voicemail message from someone you had lost and would that be a comfort or a means to continue the misery”, explains the duo. Shut The Front Door is a powerful guitar-driven anthem. “This is a real departure for us, it is pretty full on and rocky”, Paul explains, “It is basically saying – ‘you don’t like us and we are cool with that. There’s the door!’”

The recently married couple fuse their passion for country music with their eclectic musical influences to continue the tradition of exciting new music to emerge from Glasgow, following the likes of Admiral Fallow, Chvrches and Honeyblood. Their catchy hooks and dynamic male/female harmonies are delivered with a passion and style that demands attention, while their carefully crafted lyrics articulate human emotions in a sincere, ‘heart on the sleeve’ kind of way. The duo’s debut album, Hope In Troubled Times was met with huge acclaim from critics and fans alike.