Previewed: Kings of Leon at the Phones 4u Arena 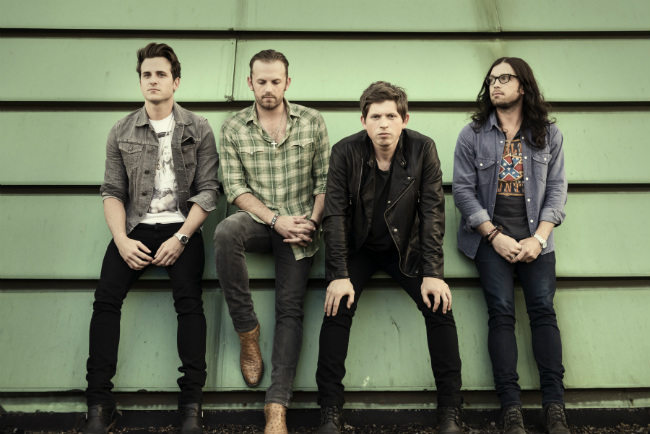 Wednesday 18th June sees the return of Kings of Leon to Manchester for a gig at the Phones 4u Arena.
Formed in 1999 in Nashville, Tennessee, a hotbed of country music, Kings of Leon are brothers Caleb Followill (vocals and guitar), Ivan Followill (drums ) and Michael Followill (bass) with their cousin Cameron Followill (guitar).

The UK has been a strong territory for the group, who have seen all of their albums perform incredibly well, topping the charts on four occasions and hitting the number three spot with their first two albums, including their debut Youth and Young Manhood (2003). In fact, the UK took to Kings of Leon quicker than the US, where it was their fourth album, the incredible Only by the Night which signalled their US breakthrough, reaching the US number four spot as it went multiplatinum the world over, hitting number one in numerous countries. They have also scooped Brit Awards in the form of Best International Band and Best International Album (Only by the Night, 2009).

With a musical style in keeping with their origins, their early music was a blend of rock and blues influences but over the years this has developed to encompass a more traditional rock feel. The spikier, edgier feel of their earlier material brought them a lot of fans with songs such as Four Kicks and On Call becoming firm favourites. But it was the stadium rock of Only by the Night which pushed them to the next level with hits such as Use Somebody and Sex On Fire. The sixth album Mechanical Bull (released after their 2011 hiatus) also showed a further evolution with a more creative experience.

The hiatus was brought about as years of heavy touring and drinking took their toll on the band and particularly on Caleb’s voice, which had for some time required him to undergo regular steroid injections to enable him to keep performing. In fact matters reached a head in July 2011 when he walked offstage in the middle of a Dallas performance, seeming to be intoxicated.

The time apart, seems to have actually fuelled Kings of Leon in producing tighter material and lead to improved performances on stage. They seem reinvigorated. The former hedonistic hell raisers may well have mellowed over the last few years with drunken drug-fuelled nights being replaced by married life, golf and relative sobriety but that hasn’t dampened their live shows. In fact, the band has been drawing rave reviews and their recent headline performance at the Isle of Wight festival, as well as warm up gigs in Newcastle and Glasgow had fans and critics praising them and their southern country-rock and indie inspired roots.

The days of performing 186 shows in a year and travelling in a tour bus are behind them – nowadays they are travelling to and from gigs on a private jet whilst staying in a mountainside retreat in Spain with their wives (including Victoria’s Secret model Lily Aldridge – not that we’re jealous!). It’s part of their (relatively) clean-living approach, which is clearly having a positive effect not only on them but also on their performance.

Kings of Leon perform at the Manchester Phones 4u Arena on Wednesday 18th June.