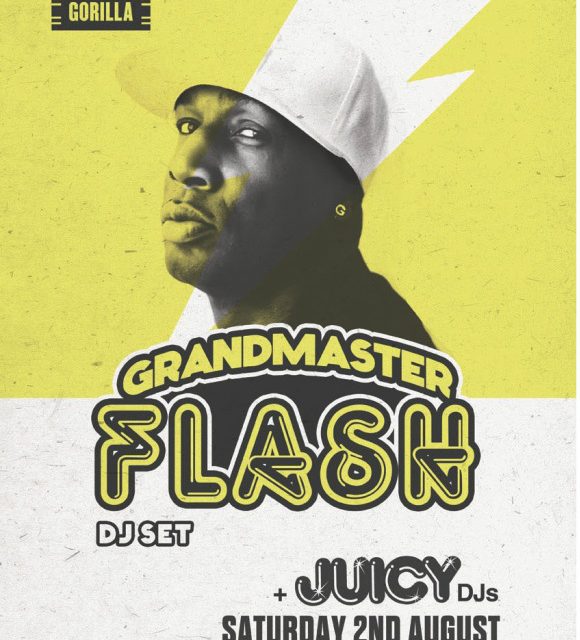 The legendary American DJ is undoubtedly one of the pioneers of DJing and brought about some of the most innovative styles and techniques which the art has seen – backspin, punch phrasing and perfecting the technique of scratching.  Grandmaster Flash began spinning records as a teen whilst growing up in the Bronx and going to neighbourhood block parties – it was his love of music (he confesses to an early fascination with his father’s record collection as a child) combined with his study of electronics which seems to have set him on this path.  He is undoubtedly one of the most creative forces DJing has seen – radicalising techniques as he used crayon, fluorescent pen and grease pencil to mark up the body of vinyl records at a time when most DJs would only handle them by the edges.  He turned the decks into an instrument.

It wasn’t too long afterwards when he began collaborating with rappers and became involved with the Furious Five.  More pioneering followed as freestyle battles were thrown into the mix.  At a time when rap music was coming to the fore, Grandmaster Flash was there and international hits cemented Grandmaster Flash and the Furious Five’s position of importance at the head of the movement.

As one of the earliest visionaries of DJing, Grandmaster Flash’s influence cannot be overstated – he’s been there since the start and laid the basis for what DJs do today.  He revolutionised the skill and turned it into an art.  With such ability and influence it’s no surprise that he has performed on some of the biggest stages and played for audiences as large as the Super Bowl as well as for the elite.  He’s been inducted into the Rock and Roll Hall of Fame; he has been honoured with the Icon Award from BET for his contribution to hip hop as a DJ; received the Lifetime Achievement Award from the RIAA and been bestowed with countless awards.

Grandmaster Flash continues to tour the world, playing festivals, clubs and venues and is always guaranteed to deliver an unparalleled show of funk, soul and hip hop.