Previewed: Gangstagrass at Band on the Wall 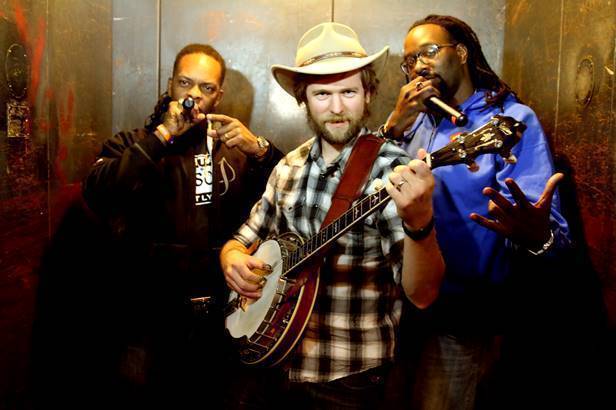 Hands up if you ever thought there would be a hip-hop and bluegrass crossover?  No?  Well there is, Gangstagrass are bringing it to Manchester.

But now one of the most innovative genre-crossing fusions comes to Manchester’s Band on the Wall.  The tour comes as Gangstagrass prepared to release of their live album Pocket Full of Fire (out 15 February worldwide).

Emmy Award nominated Gangstagrass is the brainchild of Rench, a Brooklyn-based independent singer, songwriter and producer.  Rench’s roots lie in honky-tonk and hip-hop.

He explains about the crossover, live album and innovative approach, “It is definitely time for a live album release” says Rench “Over the years we have really developed a dynamic approach to having rappers and bluegrass players on stage together. We take full advantage of the fact that both genres have a strong improvisational element. Verses are sometimes freestyled, songs are sometimes restructured on the fly. And the songs themselves have evolved into new animals that come to life on stage. We captured some great performances in the spring and it will be great to get to share the live sound with fans everywhere. … There are a lot more people out there with Jay-Z and Johnny Cash on their iPod playlists than you think,

Gangstagrass will perform ten dates across the UK, including a Manchester gig at Band on the Wall, and they’re clearly excited.  “The UK is a wonderful audience for us, and we find that the country and hip-hop combination brings out an amazing crowd for a party with us” Rench explains, “We love meeting people at the shows and interacting with them during our performances which are very spontaneous. When they see a rapper and a banjo player getting down live on stage together the way we do it, the energy really goes through the roof – even people that are familiar with our album recording find their jaws dropping to see where we take it on stage.”

When do Gangstagrass headline at Band on the Wall?

Gangstagrass headline at Manchester’s Band on the Wall on 3 February 2019.