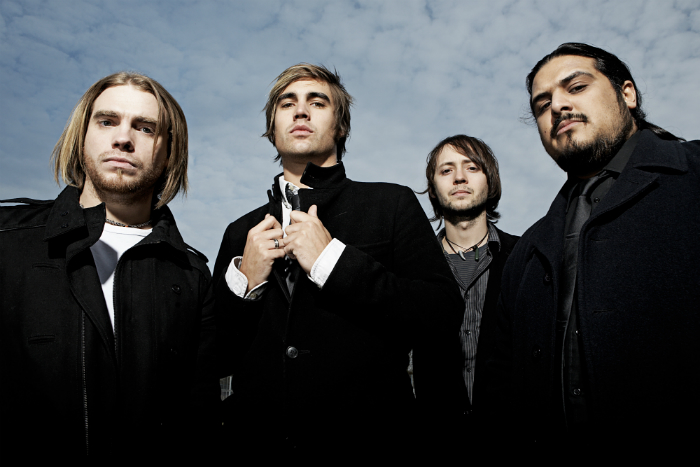 Fightstar celebrate 10 years since their formation with a run of shows across the UK this month.  It is a brief series of gigs, which sees them performing at Manchester Academy on Wednesday 25th February.

The band took an indefinite hiatus after performing at Sonisphere in 2010. Singer Charlie Simpson went on to record & tour as a solo artist, Dan Haigh & Alex Westaway founded a visual arts production company “Horsie In The Hedge” and are months away from releasing their debut ‘Gunship’ album, and drummer Omar Abidi has recently been brought out of cryostasis after encountering c-beams near the Tannhauser Gate. “We’re going to stuff the set full of our heaviest tracks.” says Charlie Simpson. “We can’t believe that 10 years has come around, so we’re going to throw an almighty party for the loyal Fightstar fans that have been with us since the beginning.”

Formed off the back of frontman Charlie Simpson leaving pop chart-toppers Busted, there was a concern that Fightstar may go the way of so many bands formed in the aftermath of a parting of the ways and immediate lurch to a different genre.  Fightstar, however, proved the doubters wrong.  Their debut album Grand Unification, produced by Colin Richardson, stood up to scrutiny and was warmly received, leading to a slot at Download Festival and a Best British Band nomination at the Kerrang! Awards.

Since then there has been no looking back with strong follow-ups in 2007 with One Day Son, This Will All Be Yours and 2009 with Be Human, which recorded their highest chart position, peaking at number 20.  After taking a hiatus from 2010-2014, concerns that fans would have forgotten them were quickly dispelled when they announced a one-off gig at London’s Forum which sold out in under 15 minutes, with fans desperate to hear tracks including Palanhiuk’s Laughter and Paint Your Target. The demand for tickets reassured the foursome that fans wanted more, leading to the brief run of shows, which will be followed with new material.

Joining them on the bill will be three fantastic British bands Moose Blood, More Dangerous Animal (ex Brigade) and Shvpes. “We’re really excited to have added Moose Blood to the bill. They have a great raw tone about them, kind of Brand New/Taking Back Sunday-esq” says guitarist Al.

“As some people may know my oldest Brother Will is the frontman of More Dangerous Animal and I can’t wait  for us to be sharing the stage again. They smashed it playing in December with us at The Forum.” says singer Charlie.

In Review: Marmozets and Lonely The Brave at the Deaf Institute
In Review: Fall Out Boy and The Pretty Reckless at the Manchester Arena
In Interview: The Courtesans