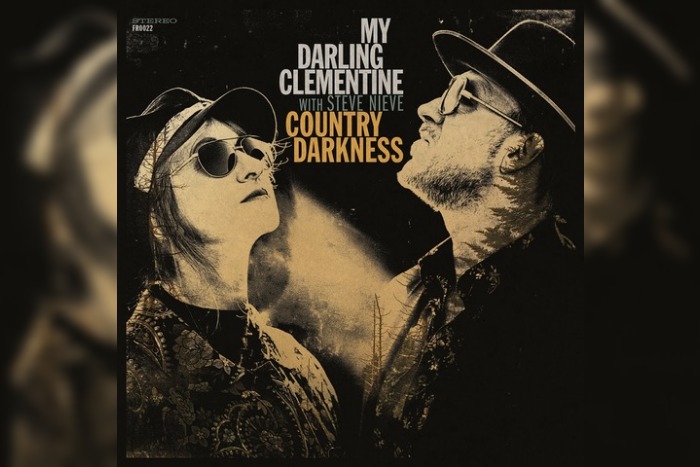 The album has be created alongside Costello’s right hand man Steve Nieve (The Attractions / Imposters) and is due for release in November.

Manchester based My Darling Clementine (the married duo of Michael Weston King and Lou Dalgleish) teased the release with latest single The Crooked Line, ramping up and electrifying the track, setting out their stall for Country Darkness.  Drawing together a collection of three 4-track EPs for the first time (‘Country Darkness’ Vol. 1-3), the upcoming compilation sees the band host some of the lesser-known marvels from Costello’s repertoire and explore their potential for something entirely different; and often darker… Reconfiguring the tracks with shades of Gothic Americana, Outlaw Country and heartbreaking Folk, the trademark vocal duet of King’s lugubrious baritone and Dalgleish’s tender siren-song unearth exquisite drama in Costello’s scriptures.

Speaking about the Country Darkness project, Michael Weston King explained, “Making these recordings took me back to my 19-year-old-self, out buying a copy of ‘Almost Blue’ during my lunch hour. It was Elvis and Steve’s making of that album which set me, and I think many others of my generation, off along a country path to discover more about this form of music previously only viewed with suspicion. For me it became something of a pilgrimage, a vocation, even a “career.” So this feels like the completing of a musical circle of sorts — to record a selection of some of mine and Lou’s favourite EC country songs with the added thrill of performing them with Steve.”

Country Darkness features tracks across Costello’s career and his ever changing eras.  From his work with the Attractions (“Stranger In The House”, “Different Finger, “Too Soon To Know”, “Why Can’t A Man Stand Alone”), to the Imposters (“Either Side of The Same Town”); to cherry-picking some remarkable later solo efforts (“The Crooked Line”, “I Lost You”), as well as reappraising a smattering of his inspiring collaborations with Emmylou Harris (“Heart Shaped Bruise”), Grammy-winner Loretta Lynn (“I Felt The Chill Before The Winter Came”), Paul McCartney (“That Day Is Done”), Nashville singer-songwriter Jim Lauderdale (“I Lost You”), and of course, his long standing right-hand man: Steve Nieve.

Speaking on working with Steve Nieve, Lou Dalgleish added, “Reflecting on those early years spent listening to my hero of the keyboard [accompanying my personal king of songwriting, EC) was it any wonder that in the spring of 2019, when he sat down right next to me and began his incredible intro to our first collaboration, that I couldn’t sing for crying? Thanks Steve, for making this sulky girl very happy.”

Country Darkness will be released on 6 November 2020.