Previewed: The Flying Lovers of Vitebsk at Home Manchester 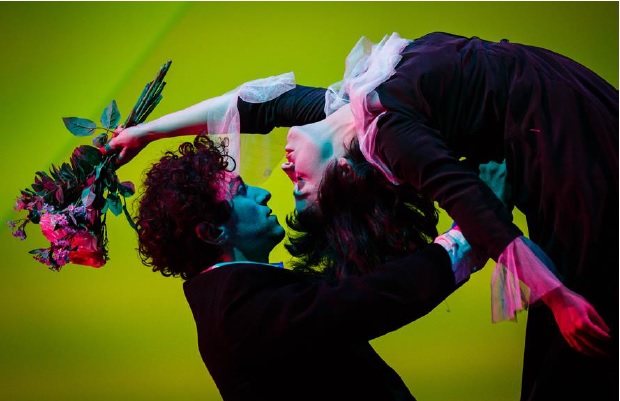 International touring theatre company Kneehigh return to Manchester with a performance of The Flying Lovers of Vitebsk at Home.

The production marks a return to Home Manchester for Kneehigh who have previously performed Dead Dog in a Suitcase (and other love songs) in September 2015, and 946: The Amazing Story of Adolphus Tips in October 2016.  The company also recently performed Brief Encounter at The Lowry.

What is The Flying Lovers of Vitebsk at Home Manchester about?

Marc and Bella Chagall were the flying lovers of Vitebsk.  The duo are immortalised as the picture of romance, partners in life and on canvas.  But whilst on canvas they flew, in life they walked through some of the most devastating times in history.

This revival traces the lives of the young couple as they navigate the Pogroms, the Russian Revolution, and each other, in a typically vigorous Kneehigh staging, woven throughout with live Klezmer music from Ian Ross and James Gow, inspired by the Russian Jewish folk tradition.

Marc Chagall was a leading pioneer of modern art whose vibrant, original style evolved against one of the most tumultuous and terrifying periods in history.  Chagall and his young wife were swept up in the confusion and brutality of world wars, revolution, ethnic persecution, and the murder and exile of millions of people. He responded with a radical, original visual style which was both mythic and dreamlike, fusing everyday settings inspired from his home town in Vitebsk in an extraordinary mystical lament, conveying love, loss, exile and the miracle of survival.

The production is directed by Emma Rice and features Marc Antolin as Chagall and Daisy Maywood as Bella in Daniel Jamieson’s critically acclaimed play.

When is The Flying Lovers of Vitebsk performed at Home Manchester?

The Flying Lovers of Vitebsk is performed at Home Manchester from Tuesday 3 until Saturday 7 April 2018.