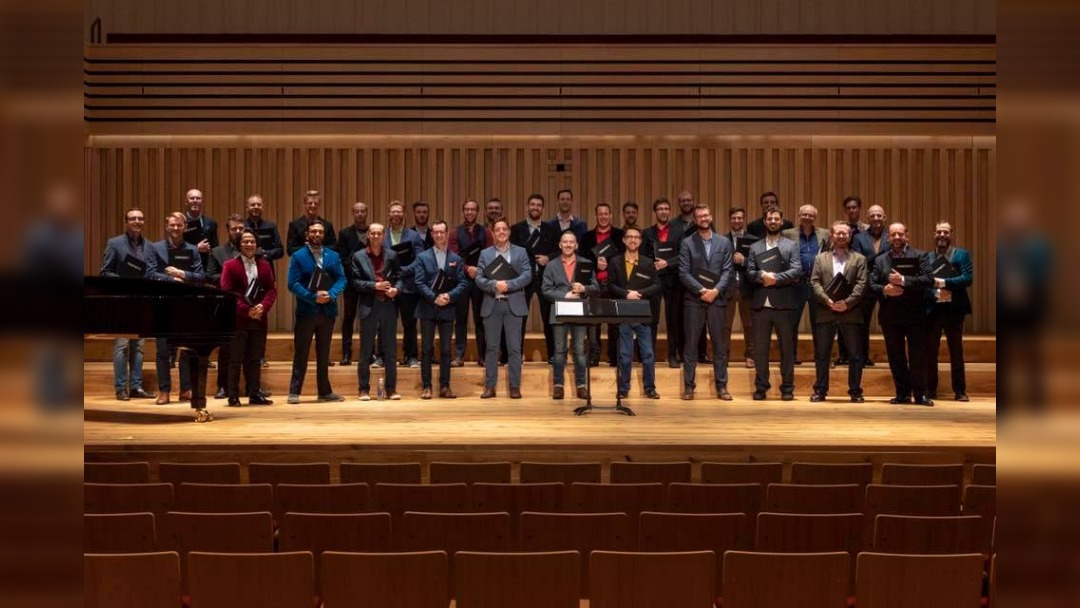 Manchester’s LGBTQ+ choir The Sunday Boys has been shortlisted as a finalist for the National Lottery Project of the Year Award.  The nomination has seen them shortlisted from more than 1,500 nominations.

The Sunday Boys received National Lottery funding through Arts Council England and have now been selected as one of 17 finalists.  The winner will receive a £3,000 cash prize for their organisation as well as a National Lottery Award trophy.

The nominations follows The Sunday Boys’ work in engaging LGBTQ+ people across Greater Manchester to sing and create music together and providing a lifeline to many in the community.

Members of the public can vote for The Sunday Boys, or any of the other fantastic projects, online on the National Lottery Good Causes website or on Twitter using the #NLASundayBoys hashtag.

The Sunday Boys was formed five years ago by Manchester-based composer and conductor Michael Betteridge, who wanted to create an inclusive LGBTQ+ choir for low voiced singers in the city to enjoy music, perform and make friends. The choir provides an ambitious, innovative and safe space for LGBTQ+ people and their allies to come together, connect and grow through their love of music and music making. The Sunday Boys tell queer stories through choral singing and provide an important voice for the LGBTQ+ community.

Speaking about being nominated, Michael Betteridge who is also the Artistic Director of the choir said, “We are so excited that The Sunday Boys are finalists in this year’s National Lottery Awards. The Sunday Boys were created to give Manchester an inclusive LGBTQ+ choir for people to learn how to sing great music, perform and of course make friends. It’s amazing to see the impact the group has on not only its members, but the people we perform too as well. We are really proud of the work we’ve done in the local LGBTQ+ community and the funding received from the National Lottery has been pivotal our success.

“Regardless of the outcome, it’s been incredible to be recognised for everything that we do – it’s a real honour and we really hope people will get behind us for the vote and beyond!”

During the pandemic The Sunday Boys have undertaken a number of creative musical projects ranging from the sombre to the hilarious. In July 2020 they launched their first digital concert ‘At Home with the Sunday Boys’ featuring a mix of new and archived material and recorded a video of ‘I Carry Your Heart with Me’ for the Manchester Pride online vigil. They also created music videos for Queen’s ‘I Want to Break Free’, Joni Mitchell’s ‘Urge for Going’, as well as ‘Summer’s Gonna Come Again’, a new commission with Manchester playwright Joshua Val Martin, all inspired by the emotions felt by many members of the choir during lockdown. Most recently Michael Betteridge won the Making Music Award for his arrangement of Swedish folk song ‘Summer Will Come Again’ featured in the ‘Summer’s Gonna Come Again’ commission.

One of the biggest lockdown projects of the pandemic was a brand-new collaboration with Scottish composer and singer-songwriter Finn Anderson and the North West’s largest performance venue, The Lowry, funded by Arts Council England. Finn Anderson (composer of Edinburgh Fringe and Southwark Playhouse hit musical ‘Islander’, and solo album ‘Until the Light’) wrote ‘Distant Dream’ in collaboration with the choir. It is a moving song about speaking back to your younger self and offering words of reassurance. Both the audio and music video were recorded in The Lowry’s Lyric Theatre.