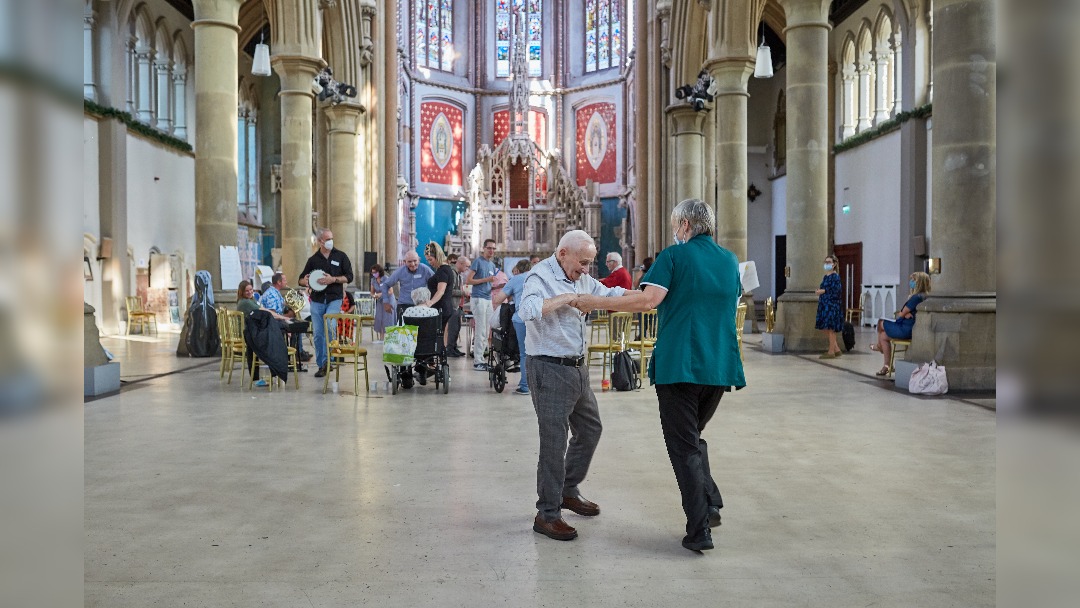 Manchester Camerata has relaunched its highly successful dementia Music Cafe at the Monastery in Gorton.  The relaunch has coincided with Dementia Action Week which runs 16 May until 22 May).

Free, weekly music making sessions return on Wednesday 18 May offering support to those living with dementia, their families and carers.  Sessions are led by specially-trained, professional Camerata musicians and music thereapists, funded by McLay Dementia Trust.

As an orchestra whose dementia-music work is fundamental to its year round Community programme, these music therapy-based Music Cafe sessions are at the very heart of Manchester Camerata’s commitment and intent to create and produce music that matters.

Due to the initial success of the music cafe in Gorton, Manchester Camerata has since launched a sister dementia music cafe in Wigan, at the Museum of Wigan Life. During these weekly meet-ups in both Wigan and Gorton, new songs and tunes are spontaneously created by the participants through improvised rhythms and songs, guided along the way by Camerata’s professional musicians and therapy team.

Speaking about the initiative, Manchester Camerata’s Head of Community, Lizzie Hoskin, said “We’re so pleased to be able relaunch our Music Café this month, in Dementia Action Week. As we saw first-hand when the cafes first began in both Gorton and in Wigan, these music-making sessions make such a positive impact to those living with dementia and also their carers. Our musicians and Community team are really looking forward to welcoming past and new friends to The Monastery, sharing a cup of tea and making music again in the amazing Great Nave – and even have a bit of a dance! We’re really proud to be able to make this Music Cafe possible with thanks to the generosity of the McLay Dementia Trust. It’s so exciting to see the positive impact our year-round Community programme and life-enhancing dementia work is having.”

Manchester Camerata’s Music Café runs weekly at the Monastery in Gorton on Wednesdays between 10am – 12pm (midday), starting on 18th May. Wigan’s Soul Time Music Cafe runs fortnightly on Mondays until August at the Museum of Wigan Life.