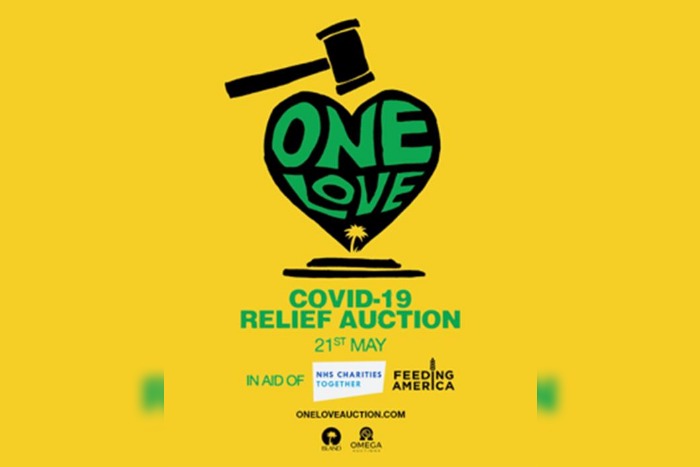 Island Records has announced that it will hold the One Love Covid-19 Relief Auction in support of NHS Charities Together and Feeding America.

Artists old and new, as well as friends of the label, have donated one-of-a-kind lots to raise funds for relief efforts. The event will be hosted by Emmy, Tony and Grammy Award-winning actor, singer, director, composer and playwright Billy Porter and will be broadcast live from 6pm on 21 May (BST).

NHS Charities Together is a membership organization representing, supporting and championing NHS Charities. There are more than 230 NHS charities across the UK and most of them focus on helping our hospitals do more. Collectively these charities give £1 million every day to the NHS so that people can stay well for longer and get better faster

What is up for auction?

Abbey Road: A private VIP tour for 4 at the legendary Abbey Road Studios followed by breakfast

Ashton Attzs: Rising artist will paint a portrait for the winner

Ben Howard: The guitar Ben wrote ‘Keep Your Head Up’ on & played onstage at Glastonbury

Donae’O: The top he wore in his classic video for ‘Party Hard’

Ella Eyre: Outfit worn by Ella in ‘Mama’ video, made by Rife & Stride

Jessie J: 4 VIP tickets to gig of choice (within country winner is based), backstage tour of venue, meet & greet with pictures & signings

Mary Wilson of The Supremes: 2 VIP tickets, plus meet & greet to her show in Las Vegas

Mumford & Sons: Signed Gentlemen of the Road Banjo made by Deering Banjos & a one-on-one virtual banjo lesson with Winston Marshall

Sean Paul: Get styled by Sean Paul – a jacket & pair of shoes from his own wardrobe

The Specials: The Specials Day certificate from the Mayor of Los Angeles & signed art prints by Terry Hall & Horace Panter

Tricky: Tricky Photograph by Nadav Kander signed by both artists

U2: Handwritten lyrics for ‘I Still Haven’t Found What I’m Looking For’ by Bono & signed ‘The Joshua Tree’ 30th anniversary vinyl boxset

To bid on the lots, you must register in advance with Island’s partner Omega Auctions, further information can be found via Island Records’ dedicated oneloveauction.com website. All lots are available to view and place bids on via an online catalogue https://bid.omegaauctions.co.uk/m/view-auctions/info/id/83