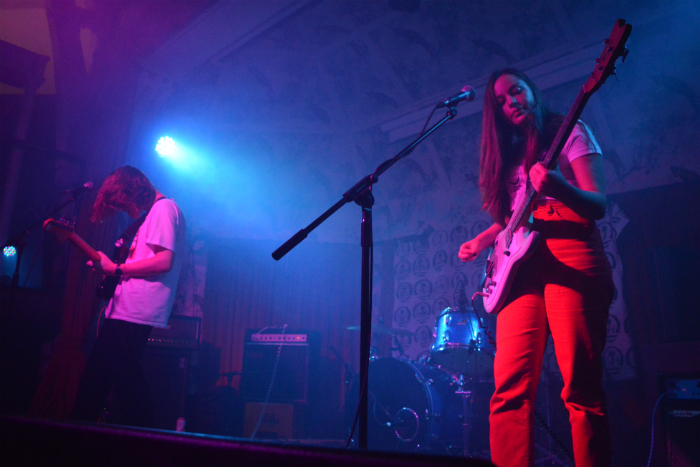 After a strong 2015, which has seen Halifax’s finest garner more support and put on a series of strong performances including July’s show at The Castle, as well as release the outstanding and addictive tune Joey Says We Got It, The Orielles brought their year to a close with another excellent gig at Manchester’s Deaf Institute.

Taking to the stage in front of a highly enthusiastic (and hugely energetic) crowd, the trio are off to an impressive start with Bitchcraft.  They look ever more confident and assured.  Guitarist Henry Wade is on fine form from the outset displaying the excellent guitar work we have come to expect from him and the crowd react to the high octane opening, jumping and moshing around.

There’s a great bass lead in to the next track Don’t Drift, a driven, up-tempo piece which has the crowd jumping around even more.  Security make an occasional intervention as the moshing becomes increasingly enthusiastic.  The Orielles have the crowd at their mercy, unsurprising given the quality of their performance.

They continue to demonstrate their variety and the impressive substance behind their high quality writing.  You can’t help but to be impressed when considering that the trio have so quickly become a known name on the music scene and picked up such  experience whilst still of relatively tender years.  And listening to their tracks (and bearing in mind those which they didn’t manage to squeeze in to the setlist) it is frightening to think how much excellent material they already have at their finger tips.

The set continues as members of support band The Showers join them on stage, only serving to please the crowd even more and making for a particularly nice touch.  They joke that the segment was prepared in just a few minutes behind the scenes, but it comes off extremely well.

Space Doubt shows yet more of The Orielles’ talents, featuring some beautiful arches and intricacies and whilst the trio continue to stun on stage, the moshing builds – it has been growing throughout the evening and security has now given up – it’s energetic but good natured and the fans are loving it.

As the set draws to a close, there’s no doubt amongst the crowd as to The Orielles’ ability and the grins and smiles around the audience say everything.  They continue to grow and develop and you can only imagine just how good they’re going to get.

The Orielles return to Manchester to perform at Soup Kitchen on 25 March 2016.  That’s one to catch.