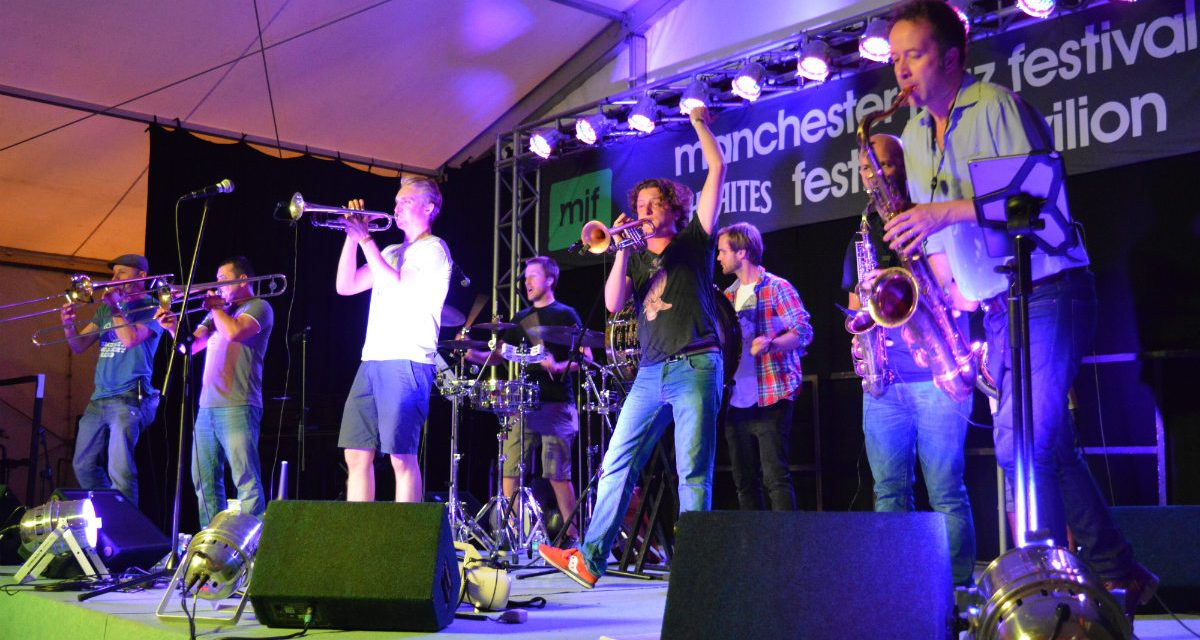 Having made their way on to the stage by processing through the audience, they immediately cut loose – there was no easing into this performance – as they launched into A Bit of Common Decency.  Energetic, thrusting, driving, bouncing – feelings which quickly became the themes of the night.  It was a musical onslaught, but in a good way, as track after track of up-tempo, uplifting jazz bellowed out, bringing cheer after cheer from the audience.

Even the slower tunes such as Creepin’ Around After Dark, set to an Afro-Carribean feel, were still busy and full of energy.

The pace and energy showed no abatement – heads were nodding, feet tapping to the heavy beat of Let’s Take It Fast (a motto they seem to live by musically) – the audience clapped along as it typified their performance.  Fast, energetic with excellent hooks.

But this is not to say that there was no variety – there was.  There was straight up jazz, Afro-Caribbean influence, ska influence, a mysterious and almost comedic feel to outstanding track Superhero Disco.

There were also a number of excellent covers thrown in – and some unexpectedly so.  Empire State of Mind was redubbed Manchester State of Mind for the evening and was one of the slower pieces they performed, until the verse was juxtaposed with the slightly higher tempo chorus, featuring excellent work by Jamie Harris on Tenor Sax; Adele’s Rolling In The Deep was also performed and featured bouncy brass; Kanye West’s All Of The Lights was performed like never before in a brave cover which worked perfectly, featuring strong trumpet work; and there were more surprises with covers of No Diggity (Blackstreet), Africa (Toto), No Good To Me (Prodigy) and Chase The Devil (Max Romeo).

Hackney Colliery Band is an outstanding collection of musicians, which was certainly displayed, from the saxophone and trumpet work in All Of The Lights; the alto sax of Creepin’ Around After Dark through to the drum solo of Dead Dialogue.

Unsurprisingly seats were abandoned during the rousing Smile For The Webcam as dancing became the order of the night and the aisles were filled.

Hackney Colliery Band will be returning to Manchester on 29th November for another night of high energy jazz at Band On The Wall.