As Manchester Jazz Festival 2014 entered into its final weekend, it seems almost fitting that it did so with an explosive night of big band jazz, courtesy of the impressive Beats & Pieces Big Band.

Beats & Pieces Big Band are rapidly becoming the stand out jazz group, having scooped Best UK Newcomer at the 2013 Jazz FM Awards; European Young Artists’ Jazz Award at the 2011 Burghausen International Jazz Festival and Ensemble of the Year at the Parliamentary Jazz Awards, and consistently putting on sublime shows, drawing critical and commercial acclaim in the process.

And the reason why they’re becoming one of the country’s most talked about jazz groups was apparent from the outset with their first track Bake, from their debut album Big Ideas. The opening to Bake was full of verve and swagger, featuring incredible performances and an outstanding alto sax solo.  But it was Sisterhood which really could best be used to underline the group – it had everything.  Sisterhood, with which they closed their opening set was an outstanding piece, beautifully developed and perfectly constructed.  A slow entrance (which you could be forgiven for thinking sounded more like Grieg than jazz) made way for added layers of depth and jazz textures to create an almost cosmic sound, before the punchy big band elements really kicked in to create a sound which was full of energy and developed into smoother jazz elements with a stunning piano, saxophone, bass and drum interlude contrasting immediately with vibrant funky jazz.  If one song could sum up Beats & Pieces that was it.

But one song could not sum up Beats & Pieces – they are more than that.  They are a band prepared to mix things up – from the smooth and playful Yafw Pt III through to the thunderous climactic conclusion of Jazzwalk, they possess stunning variety (not to mention talent), keeping the audience engrossed in their performance.  Each piece they performed was greeted with rapturous applause. 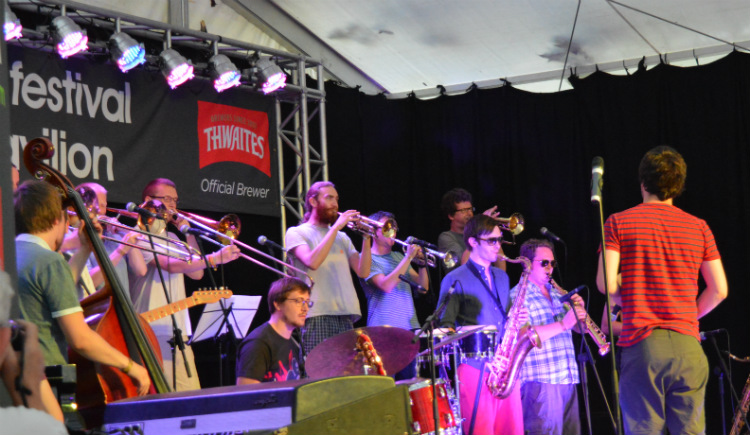 Beats & Pieces’ second set was all new material (plus a cover!).  The standard once again was just as high, varied and entertaining.  The opening song of the second set, Pop, started off with a slightly heavier feel through a stirring bass line and drums and following some excellent trumpet work, moved to an almost dreamy feel towards the end.  The development and craft of the songs was again evidenced in new piece Haffman, featuring deep bass and a mysterious feel which grew throughout to climax in an awesome wall of sound.

Beats & Pieces put on a wonderful show.  They carefully craft layers, textures, moods and ideas in an intricate and clever manner, building and developing songs, tantalising the listener, keeping the audience enthralled and desperate for the show to continue.  Not only this but despite the energy, the tremendous solos and the effort they put in they come across as cooler than a Norwegian slab of ice.

Understandably the crowd wanted an encore and Beats & Pieces obliged with Jimmy.  Featuring guitar work which would surely earn guitarist Anton Hunter a place in any leading rock n roll band of the last fifty years, it was outstanding – playful, exciting, heavy at times.  It was a fittingly energetic and entertaining way to close their show.