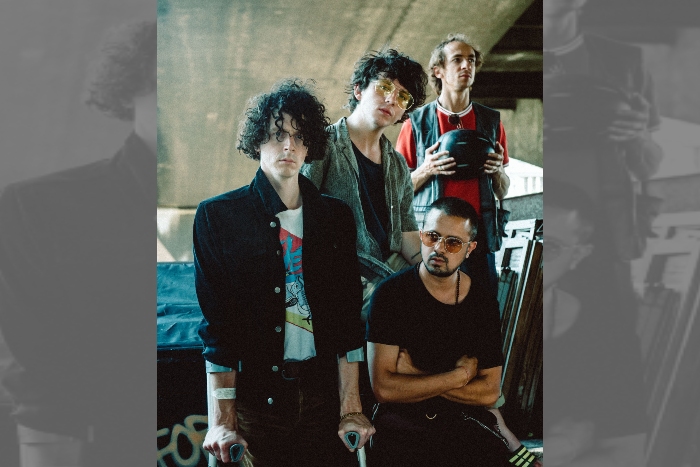 It’s not been an easy ride for Mystery Jets getting new album A Billion Heartbeats released and then hitting the road.  Originally scheduled for September 2019, the album and accompanying tour were postponed due to the hospitalisation of singer Blaine Harrison.  A rescheduled release date of 3 April was then confirmed with the tour, including a Manchester Academy gig, set for April to May 2020.  And whilst the album has been thankfully been released digitally to huge and well deserved acclaim from fans and critics alike, Mystery Jets were forced to reschedule the tour again to November 2020 due to the Coronavirus pandemic.

We caught up with drummer Kapil Trivedi to talk about getting the album out there, its influences and just how big a party it’s going to be when they come to Manchester Academy on 24 November 2020.

You’re coming up to six weeks since the release of A Billion Heartbeats. What are your thoughts now that it is out there?

It’s been really great to see the love the record’s received from our fans, and also the praise its gotten from the press. But you only really get to see the full picture once your able to go out on the road and tour the album. So we might only get the full picture 7 months down the line, when we go on tour in November. I CANNOT WAIT·

The album has been heavily influenced by the events and societal challenges of the last few years. Was it a deliberate choice to put together an album which took on these issues or did it come about organically?

It happened pretty organically. Back towards the end of 2016, Blaine was living as a property guardian in an old abandoned office, which overlooked Trafalgar square. From his window he could see a new protest, pretty much every week. So he started to take part in them, this was all about the time when the referendum had happened and Trump was running for president. It was a time where there was a lot of division, and plenty to talk about. Some of the discussions being had in our country felt as if they could potentially change our lives for good. I can totally understand the need for escapism when things don’t go as planned! But not touching on some of these themes, may have felt to us like we’re sweeping everything under the rug.

Whilst the album covers feelings such as anger, hostility and even despair it also weaves in hope and positivity. Was it difficult striking the right balance?

It would have been and easier ride if we had more of a one sided approach. However, it’s important for us to create a space where the listener can use their own initiative, and not be overburdened with the album being too literal or one sided. Nobody likes being told what to think, and one should always respect the intelligence of their audience.

What were the biggest creative challenges you faced in writing the album?

Not so much creative challenges, but more technical. When you’ve self produced and you don’t have an engineer to comp the parts, set up the mics etc it can slow the recording process down. And not having a producer to bounce ideas off can make it a little harder when you have four or five people with great ideas. Its sometimes hard to know which idea to lead with. So it can be very healthy to have an impartial, musical genius type figure who knows their way around Logic.

The album is a touch heavier and raw than previous material, does that hint also towards what’s coming next?

We’ll often change it up each record so its hard to tell, but its nice to know what’s expected, as we may go do the opposite.  After releasing Curve of the Earth in 2016 we released “The Whole Earth” EP, which included some heavier tracks, “The World is Overtaking Me”, “Spiralling” and “My Centurion”. I kinda feel like these songs were the bridge to this record. So if you wanna know what happens next. Stay tuned, we’re about to drop a Balearic house ep… not really, but ya never know!

Some bands like to take their time after the release of an album before even considering another, whereas some are pretty much writing the next before it’s even been released. Where do you stand on that?

I think both will have their pros and cons, in the early days we would release an album every 2 years, and in the later years things that went into the record were more considered, and perhaps that’s why they’ve taken longer to release. My answer these days would be as simple as whatever can keep you touring for longer periods is best! We love being on the road, meeting the fans, giving the songs the life they deserve to live.

How do you feel your songwriting and creative process has changed from album to album?

Even though as a band, we’ve jumped from DIY Eel pie, to big glitzy studios in London and from a ranch in Texas to post Brexit protest songs, the thing that remains the same is the search for new experiences. Each new experience gives something new to learn, and I think as long as that spirit is there, the albums will keep coming.

The album was released in the midst of the COVID-19 pandemic. Other than postponing your tour what other difficulties has it caused you in releasing the album?

It’s one of those things where there are bigger things going on, and if anything I’d like to think the weight of the words might be felt a little more. Our song Hospital Radio which was written and released before the pandemic is an ode to the NHS. And “A Billion Heartbeats” which is about Grenfell strangely lends itself quite well to this unique/strange time we’re all living in.

You’ve promised that there will be “an almighty mother of a party” once this is all over and you get back out on tour. What can fans expect when they come to see you?

They will come to see a party which will be their favorite bits of each jets record! We’ll start with an Eel Pie and some fishing nets, followed by some sharp pastel suites. We’ll throw in some mood enhancing paraphernalia and tassel jackets, and then will give you the WORLD (or just a curve of it)…. And finish off with a post Brexit banging encore with some Boris water cannons to boot! Don’t miss it!

“If anything it makes me think that I’ve been getting a little stir-crazy.” – Mystery Jets’ Kapil Trivedi

What are you doing to get through lockdown?

I’m running… a lot! I’ve never ran before in my life, so if anything it makes me think that I’ve been getting a little stir-crazy.

Which artists are on your lockdown survival playlist?

Ryuichi Sakamoto, Been listening to A thousand knives, what a single.
Sad to know one of my all time favorite drummers Tony Allen passed away during this lock down period, so I’ve been revisiting some of the songs he’s played on. One of the albums is Underground System, also another protest record… check out Pansa Pansa, if your into some mad afro-beat funk off.
I make smoothies every other morning and in an effort to be really generic I usually play Bob Marley – Lively up Yourself… good message for these times and it makes me feel like I’m in one of those backpacking beach shacks in Thailand. Especially with this weather also Peter Tosh’s playing’s sweeeeet on that track. Speaking of sweet… Im really getting into Sweet by Porridge Radio, sick band from Brighton.
Becca Mancari’s new song hunter is great, but I’m also listening to songs for our daughter by Laura Marling pretty much every day.
Oh and Dirty Prjectors – Overlord… incredible single, hoping there going to release a lot more music asap!

Mystery Jets will headline at Manchester Academy 2 on 24 November 2020.