In Interview: Lauren Ray – “I feel more pressure with this one” 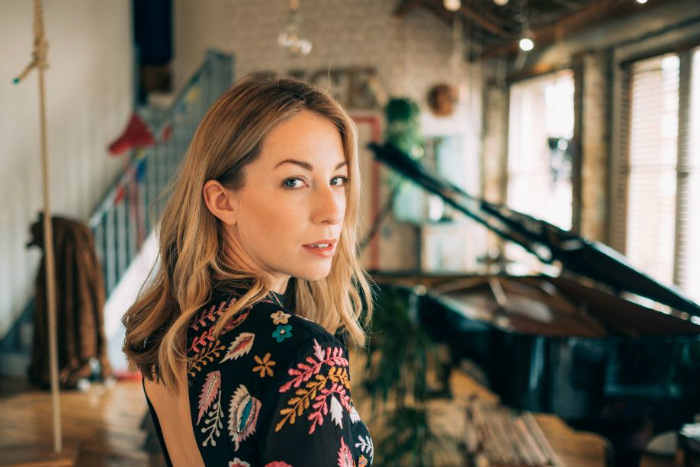 After releasing her new stunning EP Inside This Silence in August, Lauren Ray is heading out on a headline tour of the UK opening at Manchester’s Kings Arms.

She’s certainly chosen to throw herself in at the deep end on this tour, which marks what Lauren describes as her “first proper headline tour” … and she has organised it all herself.  “This is my first proper headline tour that I’ve kind of organised myself and I’ve organised everything down to who the support acts are going to be, the venues, liaising with the venues and stuff like that. I feel more pressure with this one than I did on my other tours.  I’ve toured with Lucy Spraggan and Rebecca Ferguson, Anastasia, it’s a different kind of pressure when you’re supporting a massive artist to then doing your own shows. There’s a sort of different level of concern around the shows, but I’m excited. I’m excited to see who turns out.  The supporting artists I’ve got for each show are friends of mine or artists that I’ve met along the way. For me, it’s a bit self-indulgent (she laughs), I just get to see my friends play every night which is nice.”

She tells us that finding appropriate and available venues was the greatest challenge she faced in putting the tour together.  Explaining that she organised it, what she considers to be, quite last minute, Lauren tells us about the difficulty of securing the right venue at each location: “I started organising only a couple of months ago. For me, [the greatest challenge] was just finding venues that suited my genre of music. I definitely prefer the kind of sit down venue vibes, a little bit more low key especially at this stage of my career.  So … finding venues that were suitable to my music and suitable to the kind of vibe I was wanting to do on this one, and that were all equally available around the dates that I was trying to do it on…”  But everything has come through for her.  “It has worked out quite well,” she continues, “and then these people who are supporting me are putting me up for the night and there are certain other artists I know who I’m going to be supporting on a couple of shows as I’m out to fill in my dates too. Yes, it’s all kind of falling into place but yes, definitely the initial challenge was just finding the right venues for my audience and my sound at this stage because it’s going to be an acoustic tour which, you know, narrows the venue’s options down a little bit.”

Lauren tells us that she will be performing a number of songs live for the first time on the tour.  Preparing for the tour has involved re-working this material for her to perform as a soloist rather than with a full band.  She explains, “I’m playing for the first time a number of songs I’ve never performed live before.  For me it’s just figuring out how I’m going to perform them with just myself and the piano. They were all written at the piano, but I’ve just finished recording my second album and obviously I worked on them and fully produced them and they’re performed with the full band.  So now it’s going back to how I initially wrote them at the piano and trying to perform them in the way that is both acoustic and stripped back, but also is similar to the way that it was produced, the style and the momentum. At the moment I’m just beavering away practising the songs to be honest, because the last thing you want to do is showcase new material and balls it up too much!” she laughs.

We’re obviously keen to know more about her next album.  She recently released her new EP Inside This Silence, the follow-up to 2016’s debut album We Will Need Courage.  She tells us that the album is likely to be released early Spring 2019.  She explains that she has finished recording it and it’s now ready to go through the mixing and mastering stages.

She tells us that she has recorded the new album with a producer and songwriter she has had on her ‘To Work With’ list for around 10 years, Julian Emery.  So how did this come about?  “When Lissie’s first album came out”, she tells us, “I just loved that album so much. I loved her, I loved her writing. I’ve seen her perform. What I always do, when I find an artist that I like, I look at their good old-fashioned artwork, and see who they’ve worked with … a guy called Julian Emery who has written, and sort of co-produced a number of stuff on all of her albums, since day one. He is the producer that I managed to convince to work with me on my next album. I was really excited. I got to work with someone that is a really great songwriter first and foremost, and also is a really great producer.”

But it’s not been long since the release of Inside The Silence, so we wonder why she put out the EP.  Not that we’re complaining at all, it’s a beautiful release.  “Essentially”, she tells us of the EP, “they’re four songs that I’d written randomly between when I finished writing and recording and releasing my first album in 2016. I had just written a number of different songs, with songwriter friends of mine, and I wasn’t quite ready to record a whole album, I wasn’t quite really in a position to sort of put a whole album together, but I had at least four different songs that I really loved. That I really wanted to get out there.  One of the songs Black Wings I had written whilst I was out in Germany with a producer friend of mine, and another songwriter. We had just gone out there to write pop songs to pitch to other artists. We were having this conversation about the music industry one day, and how it’s wonderful, but it’s also horrific and painful for a lot of artists. It’s very difficult and challenging. The financial and emotional struggles that go with being in the industry, but we all do it. It’s one of those weird, sort of addiction things that no one outside the industry can fully understand all the time. As soon as I recorded Black Wings, I thought, I have to get these songs out. I just wanted to put them out.”

The EP is extremely emotional.  All four of the songs Lauren explains relate to the unspoken,things that people don’t often talk about.  It addresses grief, going through hard times, the music industry, struggling to get through things on your own.

We ask Lauren whether the new album will follow in a similar vein, musically.  “With the EP, I just wanted to try different things,” she answers, “For my first album, I’d gone out to Nashville to record, and I very much just went there on my own. I decided the sound, I found the right producer, and worked with it. I was really proud of the first album. For the EP, I thought it was an opportunity for me to work with someone completely different. He’s a German pop producer. Really successful in the German market. He’s very pop. I never work with pop producers in that sense, so I thought, well, I just wanted to try it. I really enjoyed working on the EP, because I just tried things.  It isn’t an obvious continuation from the first album to the EP. There’s a lot more modern sounds, more programming. More modern drumbeats. What I’ve done with the second album, working closely with the producer, is combine the two. For each song, I gave him a reference track or a style, or a feel for what I wanted to put across in a song. It’s very much a combination of where I was with my first album, which is organic instruments and my organic sound, mixed with a more commercial, modern production. I feel like the EP was deep and then the album is a blending of two worlds. Which is why I’m really excited to bring out the album at some point. I think it’s a really nice blend of organic singer-songwriter vibes with modern pop commercial music.”

We come back round to talking about performing live.  With such personal issues being addressed in her material, we’re keen to know how she approaches performing live, how she feels on the stage.  “For me the biggest feeling I get when I get on stage and I’m performing Dull Ache or Come to Me, from my first album,” she explains, “and songs which are really personal and really touch very dark, difficult subject matters, my biggest concern is I’m worried about affecting someone in the audience in a way they weren’t prepared for. What I’ve noticed on tour, and it’s been quite surprising, is that no matter the language barrier or where I am in the middle of nowhere, if no one’s ever heard these songs before, the feeling and the effect that Come to Me and Dull Ache have on people … it just always surprises me.  I always feel so terrible at the end when people come up to me and say, “I cried,” or “That made me feel this,” or “Made me feel that.” I know that’s what the point of music is and that’s why we do it. I do always feel a weird sort of nervousness about affecting someone negatively, especially someone maybe who’s just lost someone or maybe’s just gone through a very difficult situation. Whilst I only get messages of positivity from it, I still do feel somewhat responsible for people’s feelings and what the songs might do to them.  This might sound a bit dramatic, but when somebody died, when someone comes up to me and says that they cried because they just lost someone they love and they just thought that Dull Ache really spoke to them, even if it’s a positive message, I just still feel really nervous about affecting someone in a negative way. I guess that’s just the cross I bear.

One of the things we often love about live shows is hearing the songwriter tell in their own words exactly what inspired a song.  How it came to be.  And that’s something Lauren is also keen to bring to her performances.  “I’m pretty chatty,” she laughs, “Especially when it comes to my acoustic shows, which are generally what I’ve been doing. I talk about the songs, I chat and interact with the audience quite a bit. I think anyone coming to my show, they’re going to get live music stripped back, but they’re also going to get some real information about the songs. I like to talk about where they came from or the inspiration behind it. I think I’m funny. I don’t know that’s true or not!

After a brief break following the tour, Lauren heads out on the road again, supporting Paul Carrack.  “That’s really exciting,” she enthuses. “That kicks off mid-January. What’s nice is it stretches out over February and March. The venues we get to play at [which include The Lowry on 24 March] are ridiculously amazing. I’m really looking forward to that.”

When does Lauren Ray headline at The Kings Arms?