In Interview: Jess and the Bandits 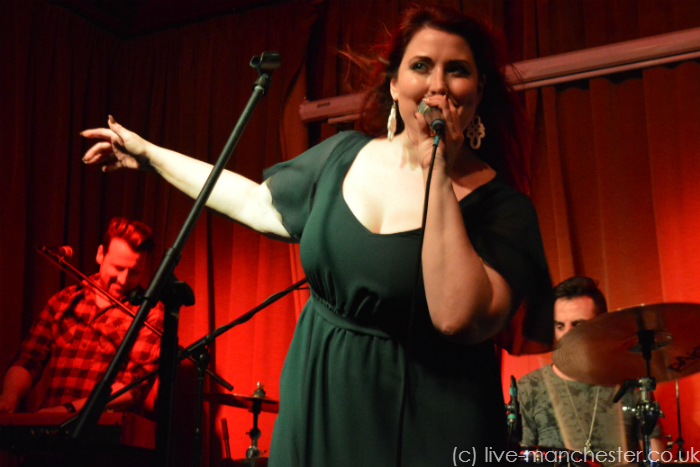 Jess And The Bandits have become quite the force in country music.  Hugely energetic live shows and an excellent debut album, Here We Go Again, have cemented them as one of the acts to watch on the country music scene.  The album, one of the top country music releases of 2015 was well received by critics and fans alike and deservedly so, also spawning the video for the upbeat and lively My Name Is Trouble, which scooped a British Country Music Award for best video.

Great album, outstanding live shows, awards – yes, you’re starting to get a feel for why Jess And The Bandits are one of the UK’s fastest rising country bands.

In My Name Is Trouble, lead singer Jessica Clemmons sings “I’m gonna show you how this country girl can rock your world.”  It’s fair to say that the album and live shows have certainly done that.

We caught up with the Texan native ahead of their recent stunning performance at Manchester’s Gullivers.

You’re approaching the end of your headline tour, how has it gone for you?

Amazing, really good.  When you’re kind of going out on your first headlining tour, you keep your fingers crossed that people come and see you … and they have!  We couldn’t have asked for a better first tour.

You have made the transition from solo artist to fronting a band, how did that come about?

We’ve been together around a year and a half.  We’ve been working together for a few years now, but we officially became a band about a year and a half ago.  Before then it was just me as a solo artist and they were behind me.  So now, we’ve made it official and doing our thing, and having a good time doing it!

Was it a difficult transition?

The transition has been surprisingly easy for me.  We’d known each other, been friends and worked together so I think that helps.  We have such a great chemistry on stage, that was the next stage.  I really like what we’ve done and couldn’t have asked for a better group of guys to work with.

Do you have to make compromises now that you’re in a band?  How do you deal with competing opinions?

We’re all musical and all have very strong opinions about everything but we’re really good at working together to make things happen the way we want it to happen.  We’re really good at listening to each other and trying things out.  That’s the great thing about music, you just give things a shot, you see how it goes and try different things and listen to each other.  So far that’s how it’s going!

You grew up in Texas so would have been surrounded by country, what are your main influences?

For me it’s been a lot of different artists.  Growing up in Texas, country music is in your DNA!  My grandparents listened to Dolly Parton, Waylon Jennings, Tammy Wynette, Glen Campbell and all of those and my mum and dad listened to Motown.  When I grew up I was listening to everything from hip hop to country to Celine Dion and Mariah Carey and I think you can kind of hear that in the influences of the music and that’s kind of where it’s all come from for me – the big singers and the story telling aspect of country music.

What’s the writing process for you?

You sit normally with a lot of liquor – well sometimes!  I think for me, especially being the one that’s singing the songs, is having songs that means something to me.  I have a lot of ideas and stories that I’ve gone through and you kind of brainstorm, talk about the stories, maybe a melody comes into play and then it just starts to flow.  Sometimes you start with a chorus and then before you know it a few hours later you have a song.  My thing is that if it sounds great with just a guitar, then it’s going to sound great with the whole band – that’s the test of a good song.

Who would you like to write or perform with?

There’s a guy named Brett James, who’s just about written every hit for Carrie Underwood.  I would live to write with him.  I’ve followed him for a while and he’s an incredible writer.  Perform with? Someone like Stevie Wonder, because he’s just a genius.  That would be a dream.  And the boys feel the same way.  That would be a dream come true.

For people who haven’t listened to your album Here We Go Again yet, firstly they’re missing out, but what can they expect?

With this album, for us, we wanted the listeners to go on a really fun journey, almost like a rollercoaster.  The album starts out with a really fun song, Ready Set, which pretty much sets the mood to the album.  We made it a point to make sure that all the songs sound different, but that they all tie together nicely.  You don’t feel like you’re listening to the same song one after the other, or at least I hope that’s the case!  You feel like you are listening to ten or twelve different songs and I think listeners will really enjoy the journey.  You can hear the emotion, the pain, the happiness, all the things you want from great songs – I hope that’s what listeners take away from it when they hear it.

Moving over from Texas, how have you found country music in the UK?

It’s exceeded my expectations.  I think something which is really special about the UK, is that in Texas country music is part of us, so people hear it and they’re like ‘ok it’s more country music’, but here there’s excitement about this new genre.  It’s really cool to be in on the ground floor, introducing a genre which has been around forever, but a genre to people, which is incredible.

Tell us a bit about your live shows, what can we expect?

A lot of energy, a whole lot of energy.  Normally, me drenched from head to toe because I put so much energy into it and the guys do too.  It’s important for us to make sure that everyone who walks through that door feels that they can party, let go of everything, forget about the busy day, kids are at home and they can actually just escape for an hour and a half and have a great time.  For us it’s a great responsibility that we don’t take lightly.  We are ready for people to have fun and that’s what it is for us.

And you’ve recently won an award for best video, My Name Is Trouble, at the British Country Music Awards.  Congratulations.

That wasn’t expected at all.  It felt amazing.  We were up against some great videos, including Ward Thomas for A Town Called Ugly, such a great video.  In all honesty I was getting ready to text and congratulate them because it’s such a great video.  So to win that award meant so much to us.  My Name Is Trouble was such fun to film, and we were able to include all sorts of people.  We did it in Rugby, actually on my manager’s farm, invited all the neighbours and friends and had a huge party.  That’s what the day was.  And you just hope you put something together and keep your fingers crossed that it comes out the way you hope.  And people love the video and we do too.  That was definitely a highlight for us.

Jess And The Bandits’ excellent debut album Here We Go Again, one of the top country albums of 2015, is currently out.

Find out more about Jess And The Bandits, their music and tour dates at www.jessandthebandits.com