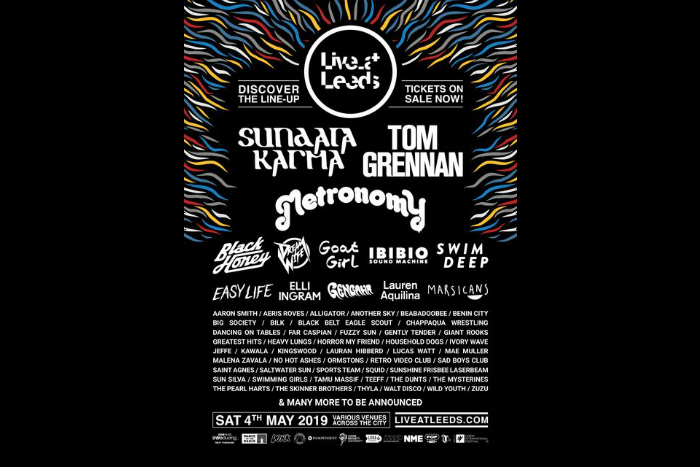 Live At Leeds returns in 2019 with what they promise to be their biggest lineup to date … and now they have revealed the first wave of artists confirmed for the festival.  And it’s quite something.

Set across venues and locations around the city, Live At Leeds has revealed headliners to will include guitar heroes Sundara Karma, Metronomy and breakout artist of 2018 Tom Grennan.  Organisers have also confirmed the excellent Swim Deep, the sensational Dream Wife, carefree pompers Sports Team and the force that is Black Honey.

Always changing and with something different around every corner, Live At Leeds packs in a vast array of bands and acts reshaping genre and styles. Scrappy South-Londoners Goat Girl have made a name for themselves with their fresh and unique take on what a guitar band can be, and their forward-thinking but raw set is bound to provide a moment unlike anyone else. Dreamy four-piece Gengahr bring themselves to Live At Leeds as they continue to innovate and evolve, with second album ‘Where Wildness Grows’ released last year to acclaim across the board.

Who has been announced for Live At Leeds so far?

When does Live At Leeds take place?

Live At Leeds takes place on 4 May 2019 in Leeds City Centre.  The event is part of Leeds International Festival 2019.