Films Showing at The Cornerhouse Throughout August 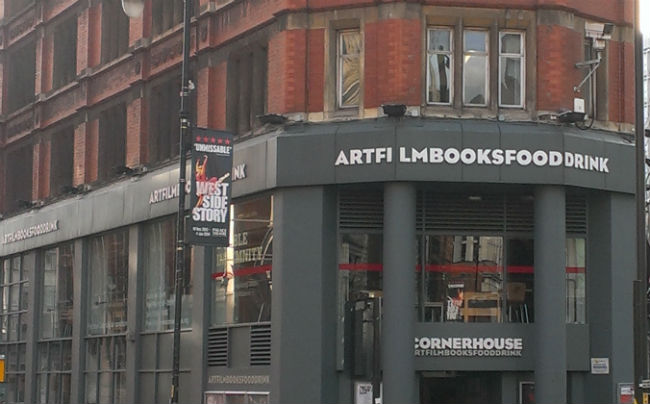 NEW AUGUST FILM LISTINGS AT THE CORNERHOUSE THIS AUGUST:

Mood Indigo is the surreal and poetic tale of Colin, an idealistic and inventive young man, and Chloe, a young woman who seems like the physical embodiment of the eponymous Duke Ellington tune. Their idyllic marriage is turned on its head when Chloe falls sick with a water lily growing in her lung. To pay for her medical bills in this fantasy version of Paris, Colin must go out to work in a series of increasingly absurd jobs, while around them, their apartment disintegrates and their friends, including the talented Nicolas, and Chick -a huge fan of the philosopher Jean-Sol Partre -go to pieces.

Ben Whishaw, Morven Christie A moving and intimate drama, Lilting focuses on the fragile relationship between a son, his mother and his lover. Driven by two outstanding performances from Ben Whishaw and the legendary Cheng Pei Pei (Crouching Tiger, Hidden Dragon), writer-director Hong Khaou’s new British film is a touching exploration of complex feelings and emotions.

Welcome to New York (from Fri 8 Aug)
Dir Abel Ferrara/US Fr 2014/125 mins/Cert 18 Gérard Depardieu, Jacqueline Bisset, Drena De Niro
Loosely based on the events surrounding the arrest of Dominique Strauss-Kahn, Abel Ferrara’s riveting drama is a hell-for-leather tale of greed and excess, powered by a commanding performance from Gerard Depardieu. Corpulent and lustful, Devereaux is a man in control of global economies whose egotism and belief that he is above the law eventually leads to his undoing. Ferrara is on home turf in New York and his camera prowls through the business magnate’s world, capturing every detail.

A German doctor meets an Argentinean family and follows them on a long desert road to a small town where the family are starting a new life. Eva, Enzo and their three children welcome the doctor into their home and entrust their young daughter, Lilith to his care, not knowing that they are harbouring one of the most dangerous criminals in the world. At the same time, police are desperately looking to bring the German doctor to justice.

All this Mayhem is a searing account of what happens when raw talent and extreme personalities collide, taking two brothers from the top of the world to unimaginable depths in just a few short years. This unflinching, never-before-seen tale uncovers a world of drugs and unfettered hedonism during the glory days of professional vert skateboarding. Legendary skaters and charismatic brothers Tas and Ben Pappas share an intense bond that not only propels them to the pinnacle of their sport, but also proves their undoing in this tragic story of Shakespearian proportions. Utilising hours of footage taken throughout the brothers’ lives through the present day, paired with interviews with other legendary skateboarding stars, the film chronicles the brothers meteoric rise to number one and two in the world and the heartbreaking personal and professional story that ensued. Touching upon their revolutionary styles, feuds with Tony Hawk, the darker side of fame, and immeasurable passion for their sport and each other, All this Mayhem is an epic story of having and losing it all.

Following his acclaimed film Animal Kingdom, David Michôd returns with a visceral and menacing thriller.Ten years after a collapse in the western economic system, Australia’s mineral resources have drawn the desperate and dangerous to its shores. With society in decline, the rule of law has disintegrated and life is considered cheap. Eric is a cold and angry drifter who has left everything and everyone behind. When his car – his last possession – is stolen by a gang of desert hustlers, Eric embarks on a ruthless mission to track them down.

The Congress (from Fri 15 Aug)
Dir Ari Folman/IL DE PL LU FR BE 2013/123 mins/Cert 15 Robin Wright, Harvey Keitel, Jon Hamm
Robin Wright, here playing a version of herself, gets an offer from a major studio to sell her cinematic identity: she’ll be numerically scanned and sampled so that her alias can be used with no restrictions in all kinds of Hollywood films -even the most commercial ones that she previously refused. In exchange she receives loads of money, but more importantly, the studio agrees to keep her digitised character forever young -for all eternity -in all of their films. The contract is valid for 20 years. The Congress follows Robin as she makes her comeback after the contract expires, straight into the world of future fantasy cinema.

John Voce, Julia Rayner In 2011, artist Bob and Roberta Smith made waves in the art world with Letter to Michael Gove, a painted-word response to the Education Secretary’s proposed eradication of art from the British school syllabus. In his feature film Art Party, Smith builds on this protest with a mix of performance, interviews and imagined scenes, en route to the 2013 Art Party Conference, championing the importance of art and its place in the education system, ultimately asking “how do you tell one man he’s got it wrong?”

Two Days, One Night is the emotional and affecting story of one woman’s struggle with mental illness and potential redundancy. Following an extended period of sick leave, Sandra has just one weekend to convince her colleagues that they should each give up their bonus in order for her to keep her job, after company bosses sanction a ‘Sandra or Bonus’ staff vote to make their difficult decision. This powerful film from social commentators Jean-Pierre and Luc Dardennes features a virtuoso performance from Marion Cotillard as Sandra, and raises important issues of workers’ rights.

Night Moves is the story of three radical environmentalists who come together to execute the most intense protest of their lives: the explosion of a hydroelectric dam, the very source and symbol of the energy-sucking, resource-devouring industrial culture they despise. A tale of suspense and a meditation on the consequences of political extremism, the film questions at what point legitimate convictions truly demand illegal behaviour, and what happens to a person’s political principles when they find their back against the wall.

Nikolaj Lie Kaas, Fares Fares, Sonja Richter, Rasmus Botoft, Eric Ericson
Carl Mørck is a disgraced detective who is re-assigned to the newly created Department Q, a basement-bound job filing cold cases, and assigned a new assistant; Assad, a smart young Muslim cop. Going against orders, Mørck’s stubborn nature throws them headlong into the mystery of a missing politician’s disappearance five years earlier. Believing the case to be unsolved, they embark on a dangerous journey that will lead them into the dark underworld of Copenhagen. The Keeper of Lost Causes is the first thrilling adaptation of the best-selling Department Q crime novels by Jussi Adler-Olsen.

Jenny Slate, Jake Lacy, Gaby Hoffman, David Cross Obvious Child is the story of unapologetic Brooklyn comedian Donna Stern, a twenty-something loose cannon who gets dumped, fired and pregnant in quick succession. Better at cracking jokes about her flatulence and the contents of her knickers in her weekly stand-up routine than doing her taxes, Donna has a lot of growing up to do. With her parents nudging her to take control of her life, Donna is forced to do just that when she falls pregnant following a one-night stand with clean-cut, sensible Max – a guy not remotely her type – and decides to seek the choice most responsible to her future. With the support of her friends Nellie and Joey, Donna learns how to be brave, honest and vulnerable in real life; not just on stage.

Gary is a young lad from a remote town in Mississippi who is subject to constant physical abuse at the hands of his alcoholic father. One day he turns up at Joe’s workplace looking for work. Joe takes him on, but it soon becomes clear that the benevolent boss has his own demons to face. David Gordon Green’s understated drama profits from one of Nicolas Cage’s finest performances.

Richard Linklater worked with his cast on and off over a staggering 12-year period to produce this highly anticipated coming-of-age drama. The film tracks Mason throughout his formative years, from his life as a six year-old-boy to adulthood, through a familiar whirl of family moves, controversies, faltering marriages, re-marriages, new schools, first loves, lost loves, good times, scary times and a constantly unfolding mix of heartbreak and wonder. Boyhood builds into a deeply personal experience of the incidents that shape us as we grow up and the ever-changing nature of our lives.