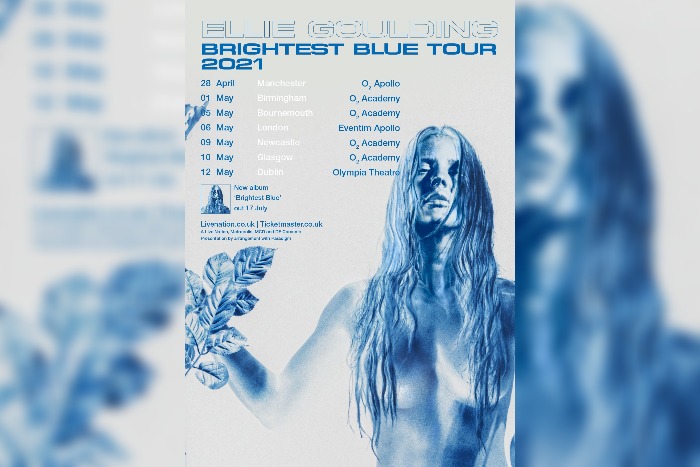 Ellie Goulding has announced her Brightest Blue Tour 2021, opening with a Manchester gig at the O2 Apollo in April.

The singer has revealed the dates of her intimate run of shows across the UK and Ireland, to follow her new album Brightest Blue.

Speaking about the tour, Ellie Goulding commented, “I’m so excited to get back on the road and do what I do best. This album has been such a passion project over the past five years and throughout the entire process I’ve been able to picture exactly what the live staging would look like – intimate, stripped back, honest, yet incredibly visual and special. I can’t wait!”

Brightest Blue includes a number of recent releases alongside new material with the album set in two parts, Brightest Blue and EG.0.  Goulding enlisted a number of writers and producers to help create the finished product across the two halves including Tobias Jesso Jr, Starsmith, ILYA, serpentwithfeed, Patrick Wimberley and Jim Eliot.

She explained that the first half of the record “reflects my vulnerability… it acknowledges a complex world where relationships still dictate our happiness and heartbreak and can still be the most painful thing in the world, no matter how enlightened you are. The tracks also symbolise growing up and becoming a woman.” While the second half of the album “encapsulates my confident, brave and fearless side and features all my recent collaborations.” Ellie elaborates, “I often find myself writing about my thoughts and emotions in a way that I know will be catchy and memorable. I will always seek to use my voice in ways that no one would ever expect and look to collaborate with the least likely, exciting and eclectic group of other artists.”

The seven date UK and Ireland tour will open in Manchester at the O2 Apollo, finishing two weeks later at Dublin’s Olympia Theatre.

When does Ellie Goulding healdine at Manchester’s O2 Apollo?

Ellie Goulding headlines at the O2 Apollo Manchester on 28 April 2021.  The Manchester gig is the opening show of her seven date UK and Ireland tour:

When do tickets go on sale for Ellie Goulding’s Brightest Blue UK and Ireland tour?

Tickets for Ellie Goulding’s Brightest Blue tour go on sale at 9am on Friday 3 July.  Fans who pre-order any format of the album from Ellie’s official store by 5pm BST on Tuesday, June 30 will gain access to an exclusive pre-sale access on Wednesday, July 1 from 9am