Calexico and Iron & Wine to perform at Manchester’s Bridgewater Hall 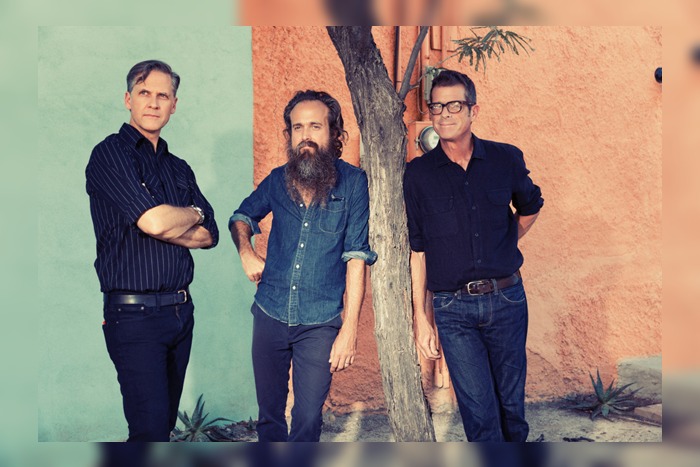 Alternative/indie country collaborative Calexico and Iron & Wine head over to the UK in support of their latest album Years To Burn with a Manchester gig at the Bridgewater Hall.

Calexico band members Joey Burns and John Convertino once again teamed up with South Carolina’s Sam Bean (Iron & Wine) on their latest album Years to Burn.  The album was released in June.

Calexico and Iron & Wine first made an artistic connection with In the Reins, the 2005 EP that brought Sam Beam, Joey Burns and John Convertino together. The acclaimed collaboration introduced both acts to wider audiences and broadened Beam’s artistic horizons, but it was the shared experience of touring together in the tradition of Bob Dylan’s “Rolling Thunder Revue” that cemented their bond.

Finally, last year, they came together again.  And despite styles which had slightly diverged since 2005 (“In my mind, I was a guy who knew three chords and recorded in a closet.  They were playing big stages and were superb musicians” comments Sam Beam) they found themselves quickly aligned.

“The arranging, the writing, his sense of rhythm, the quality of his vocals—and then there’s the experimental side of Sam,” Joey says. “They were the perfect band at the perfect time for me,” Sam adds. “I loved all their different sounds. They’re musical anthropologists, not regurgitating but absorbing what they discover.” Nearly 15 years on, “coming back to the project has to do with acknowledging how much impact the first record had for me in my life.”

Years To Burn was recorded in Nashville over four days in December 2018.  They were joined by Grammy winning engineer Matt Ross-Spang and Rachel Moore.

Beam wrote all the songs for In the Reins. He took the lead again here, bringing five songs to the session, but Burns added one of his own in the end too. They took differing approaches; Sam shared meticulous demos ahead of time and was ready with arrangement ideas and instrumental parts, while Joey spontaneous as ever, came in with concepts and an eagerness to improvise. Upon arriving in Nashville, he also penned a tune.

“This project had to find the right time,” Joey concludes. “We’re all different people than we were in 2004, and music helps to bridge some of the gaps. For all the things going on in our world and in each of our lives, this connection, this friendship, this love that we have—this album is a vehicle for that bond. It’s a chance to see where we’re at, take stock and be there for our friends.”

When do Calexico and Iron & Wine perform at Manchester’s Bridgewater Hall?