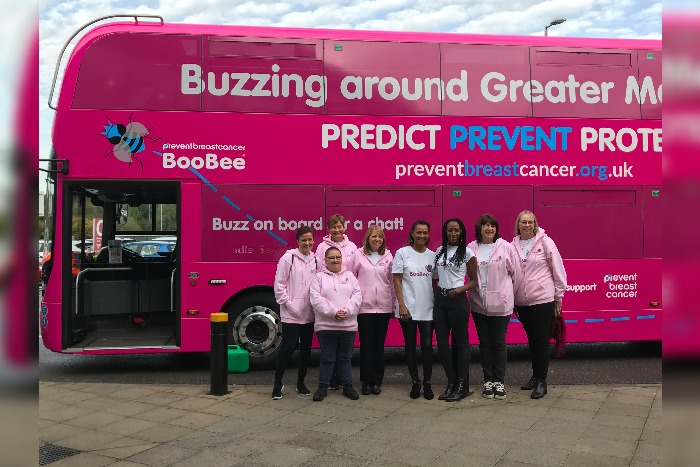 Actress and singer Victoria Ekanoye has become a patron of Manchester-based charity Prevent Breast Cancer.  The 37-year old from Bury became a household name playing Angie Appleton in Coronation Street before leaving the ITV soap in 2019.  She has also had a recurring role in The Royals alongside Liz Hurley and appeared in celebrity X-Factor.

Prevent Breast Cancer’s mission is to lead ground-breaking research into the prediction and prevention of breast cancer. Its strategy is two-fold; firstly PREDICTION – finding methods of predicting a woman’s personal risk of breast cancer; and secondly PREVENTION – researching ways of lowering women’s risk of developing cancer, in order to prevent the disease.

One of Prevent Breast Cancer’s key areas of focus is genetic research, to find out more about which genetic factors can increase the risk of developing breast cancer.  Along with BRCA, there are many types of gene mutations that can lead to a higher risk of breast cancer being passed down generations of family members, such as SNPs and breast density.

Victoria and Candy were also involved with the charity’s BreastFest campaign, a month-long campaign that ran in October 2019, aiming to make Manchester the most breast aware city in the UK. Victoria said: “I’ve been fortunate enough to be a part of a lot of incredible teams over the years, but the Prevent Breast Cancer family really are up there with the best.”

Victoria is now working with Prevent Breast Cancer to raise awareness and encourage younger women to check themselves regularly for lumps and unusual symptoms in their breasts.  Speaking about becoming a patron for Prevent Breast Cancer, Victoria Ekanoye commented, “Breast cancer has sadly affected my own family quite heavily and it lights a fire in my tummy at the thought of being a part of a team that can help prevent such a devastating disease for men and women alike. It’s an honour and a privilege to become a patron and I can’t wait to help raise funds and awareness for this incredible charity.”