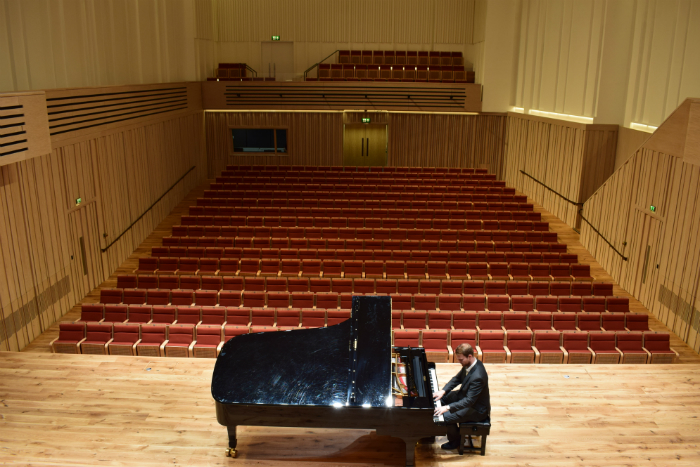 Built within Chetham’s School of Music, the new concert hall comes to life with its first public concert on Friday 21 April as it hosts an opening weekend of concerts featuring Chetham’s alumni, students and friends of the school as well as a special gala.  The opening weekend will also showcase the diverse programming planned for the space.

The first audience to enjoy The Stoller Hall will be guests of BBC Radio 3’s In Tune, broadcast live from the venue on Friday 21 April from 4:30pm, with a line-up of guests and performers drawn from events across the Opening Weekend. Alumnus and pianist Gwilym Simcock leads the inaugural concert in the Hall alongside violinist Thomas Gould and guitarist Mike Walker in a programme showcasing the trio’s unique fusion of jazz, classical and folk sounds. Shostakovich’s Quartet No. 5, Schubert’s Quartetsatz and Beethoven’s String Quartet No.1 in F major are featured the next day as chamber music continues with the Navarra String Quartet performing before The Stoller Hall is filled with jazz and stand-up comedy in the evening courtesy of Chetham’s Big Band and a special guest.

The weekend culminates with the official launch of The Stoller Hall in the form of a champagne Opening Gala, attended by benefactor Sir Norman Stoller. Conductor Sir Mark Elder and Director of Music at Chetham’s School of Music, Stephen Threlfall direct a host of superb musicians in a specially-formed orchestra of alumni, staff and friends in a performance beginning with Walton’s Henry V; Brahms’ Alto Rhapsody led by mezzo-soprano Kitty Whately; and Ginastera’s Variaciones Concertantes. Alumnus and internationally renowned pianist Paul Lewis completes the line-up, playing Beethoven’s Piano Concerto No.2. 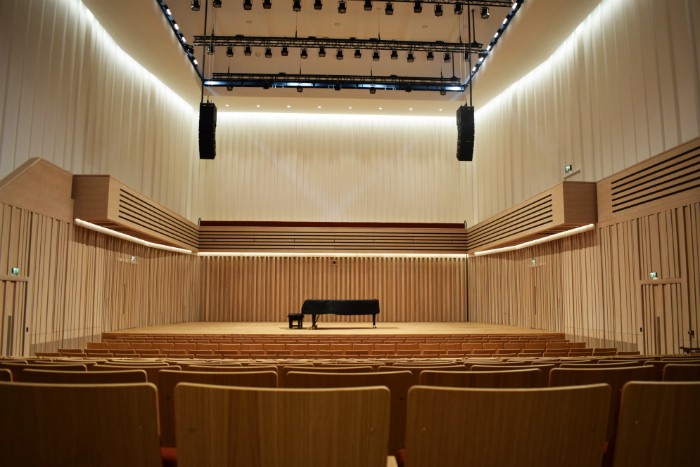 The opening weekend celebrations are spread across the whole Chetham’s site with a complimentary schedule of events including music, art and dance in the Carole Nash Hall and Oglesby Atrium featuring Orchestral Life by photographer Tom Bangbala; Debussy sonatas performed by members of staff and interpreted by dancers from Hammond School and Victoria College, Melbourne and free foyer music from cellist and alumna Gabriella Swallow and her Urban Family.

The new Stoller Hall boasts a 482-seat auditorium housed within the UK’s largest specialist music school, and will offer an array of events with an inspiring programme of performances, learning and participatory opportunities designed to engage families, schools and communities of all ages. It will provide a new home for key Chetham’s ensembles and for professional artists, offering a more intimate acoustic and embracing audience experience to match the quality of performers emerging from the city and inspiring audiences to discover and enjoy live performances.

The Stoller Hall has been designed by Stephenson Studio architects with Arup Acoustics, and built by Sir Robert McAlpine. £7.5m of its overall cost has been generously donated by Sir Norman Stoller through the Stoller Charitable Trust, with additional support from the Garfield Weston Foundation. Members of the public are invited to support the remainder of the project costs by donating a ‘Round of Applause’ or naming a seat through the Encore campaign. Honorary seats will be dedicated to Sir Mark Elder and the late Michael Kennedy in recognition of their vital role in championing classical music in Manchester.

Stephen Threlfall, Director of Music at Chetham’s and Artistic Director of the Opening Weekend commented, ‘This superb Hall represents an important milestone in the progressive history of Chetham’s being not only its first ever concert hall but also an outstanding gift to the cultural life of the region.  We’re thrilled that our current and past students and our many friends across the musical world will all feature in the christening of The Stoller Hall.’