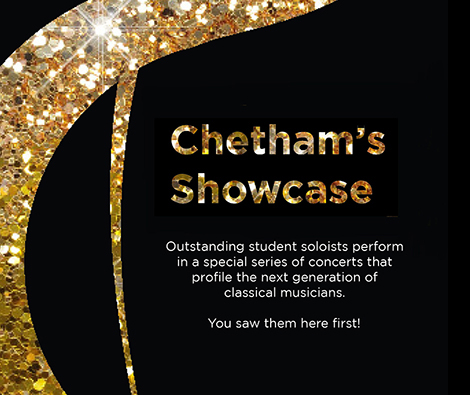 See the award-winning jazz and classical musicians of the future

Outstanding student soloists from across Chetham’s School of Music are set to perform a series of 20–minute recitals within this full-length concert, featuring jazz numbers including Cry Me A River, Bye Bye Blackbird and Smile.

As the largest specialist music school in the UK and the only one based in the north of England, Chetham’s has developed a reputation for producing the best young performers and honing the talents of its 300 students.

Performers in the latest in the Chetham’s Showcase Series include eighteen-year old saxophonist Alexander Bone, the first ever winner of the BBC Young Musician of the Year – Jazz Award.  Alexander has performed with many high profile names including Snake Davis who mentored him many times and Stan Tracey. He has recently worked with disco legend Nile Rodgers (CHIC) and drum & bass producers Rudimental at RAK Studios in London on a remix of Le Freak which was released in October 2014. He has also performed live with Newton Faulkner, writing an exclusive arrangement of his hit song Indecisive.

Oren McLoughlin first discovered his passion for drums at the age of two when he received his first drum kit. Oren’s performances with Chetham’s range from Chetham’s Symphony Orchestra through to Big Band and smaller jazz ensembles. He is also the drummer in The Jam Experiment.

Pianist Thanat Vijitthanasarn has participated in several competitions within South-East Asia and the UK, where he has been a prize-winner on many occasions, including the 4th ASEAN International Chopin Competition. Thanat has performed recitals both in the UK and Bangkok. Previous recitals include performances in Chester, Derbyshire, Harrogate, and Manchester.

Join them for a fantastic evening and enjoy the world-class acoustic of The Carole Nash Hall in the exceptional new Chetham’s school building, which opened in 2012.  Classical performances will also include works by Debussy Fauré.

In Review: Olafur Arnalds at the Royal Northern College of Music
This Week’s Classical Highlights