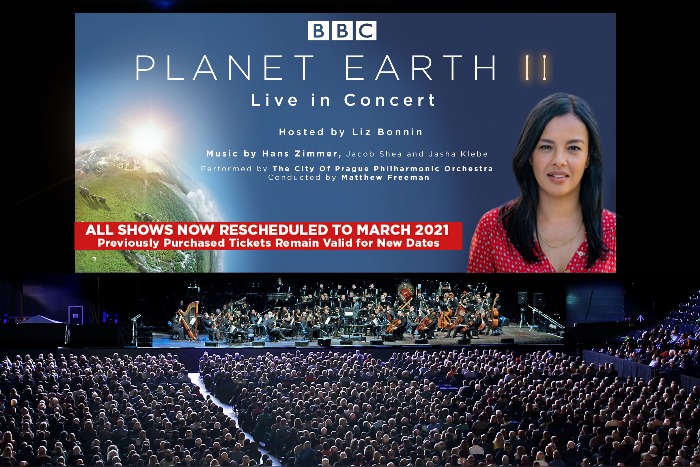 Planet Earth II Live in Concert at Manchester Arena has been rescheduled to March 2021 due to the uncertainty around live shows and large gatherings for the foreseeable future.

Originally postponed for a UK and Ireland arena tour in October and November 2020, the dates will now run in March 2021, concluding with a show at Manchester arena.  All previously purchased tickets remain valid for the rescheduled dates.

Barry Campbell, UK promoter from FKP Scorpio commented, “Due to the ongoing COVID-19 situation and uncertainty around concert mass gatherings, we felt it was important to move our Planet Earth II tour once again, to spring 2021. We want these shows to be a great experience and it is important to us that the public should feel safe and to be able to attend the shows without worry. We promise it will be a spectacular tour well worth waiting for and thank all ticket purchasers for their patience and understanding in these most difficult times.”

Planet Earth II Live in Concert is hosted by science and natural history TV presenter Liz Bonin and features behind the scenes insights from Mike Gunton, the executive producer of the BAFTA and EMMA award-winning BBC television series.  The live concerts look at the power and beauty of nature featuring breathtaking footage shown in 4k ultra high-definition on a gigantic LED screen accompanied by the City of Prague philharmonic.

The orchestra is conducted by Matthew Freeman and will perform the music by Oscar winner Hans Zimmer, Jacob Shea and Jasha Klebe for Bleeding Fingers Music.

Speaking about the show and delay, host Liz Bonnin added, “The last few months have been incredibly difficult for everyone and we are reeling from the impact of this pandemic. Our hope is that, once we begin to recover from this extraordinary situation, our tour can play a small part in offering joy, healing and optimism. It will be an uplifting experience, celebrating the majesty of life and all the beauty and wonder that Mother Earth has to offer. I’m all the more excited to be able to share it with you.”

When is Planet Earth II Live in Concert performed at Manchester Arena?