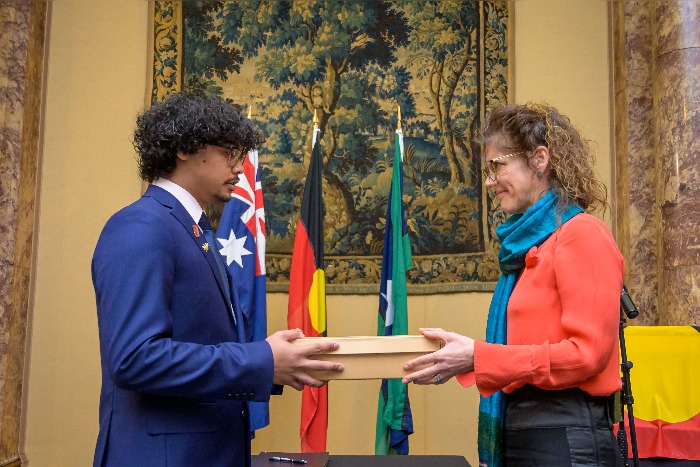 In the letter, Esme Ward addresses the concerns which people raise about repatriating items, the positives of doing so and the social responsibilities museums and institutions have.

The letter comes as Manchester Museum works alongside AIATSIS (Australian Institute of Aboriginal and Torres Strait Islanders Studies) and traditional owners from Ganaglidda Garawa to return 43 items to four Aboriginal communities with a further handover ceremony to be held in late February 2020.

The full letter, titled The tide of change, is set out below

Open letter: The tide of change

“we share a dark history – but its moments like this, when we come together as one, united by our desire to do better, to be better and to right the wrongs of the past, that we start to heal spiritual hurts and the intergenerational trauma that still exists today”

Mangubadijarri Yanner, one of the Traditional Owners, handover ceremony.

Museums are products of their age, reflecting the preoccupations, politics, obsessions and values of their time. They are not and never have been neutral. The notion that returning museum objects to former colonies risks ‘denying Britain’s history’ or that decolonising museums is somehow decontextualizing them, has never seemed more myopic, misguided or defensive than in this last week. It reflects an existential crisis in the world of universal museums and an inability to fully acknowledge, interrogate and address the impact and complexities of empire.

In partnership with AIATSIS (Australian Institute of Aboriginal and Torres Strait Islanders Studies) and traditional owners from Ganaglidda Garawa, Manchester Museum, at The University of Manchester has begun the process of unconditionally returning 43 items to four Aboriginal communities, afurther handover ceremony will be held in late February 2020. As you read this, twelve ceremonial, secret and sacred objects are journeying home to their traditional lands in the Gulf of Carpentaria, to be used in the ceremonies they were made for.

We have held much of this material in Manchester since the 1920s. Like many museums we have been active in returning ancestral remains to their communities of origin since 2003, but this marks the first return of secret, sacred and ceremonial material to Australia. The other distinguishing factor is the unconditional nature of this repatriation (without conditions or limitations). It does not move the objects from one institution to another, but instead fully acknowledges that Aboriginal people have the primary and sole right to the ownership and control of all forms of their heritage.

The Board of Governors was unanimous in its decision to unconditionally repatriate this material. The University of Manchester’s commitment to academic freedom and social responsibility sets a powerful context for this; its students represent the next generation of global citizens making changes in the world and actions such as this are a positive example that reflect our common humanity. We have been overwhelmed by public support for the decision and are hopeful that we are embarking upon a new chapter for museums.

The remarkably simple and profound vision of AIATSIS to build a world in which Aboriginal and Torres Strait Islander knowledges and cultures are recognised, respected and valued resonated with our mission at Manchester Museum to build understanding between cultures and a sustainable world.  All too often debates about repatriation happen behind closed doors and there is fear and uncertainty about how it actually works.  We want to be more transparent and open in the hope that it encourages and supports others and next month, we will jointly publish information about our collaboration; the process, costs, provenance research and methodology that led to this landmark decision.

Debates about repatriation usually focus on what is lost, not what is gained; the new understanding, insights and perspectives when museums show a commitment to healing and care.

Care underpins the work of all museums. In Manchester, we are reimagining a new ethics of care for museums that extends beyond collections to people, ideas, beliefs and relationships. It seems so simple, objects and people are inextricably linked.  Yet as curator Stephen Welsh, who led on the repatriation in Manchester, observed, the Western processes and protocols established to catalogue, preserve and analyse objects and specimens in isolation from traditional owners, countries of origin and diaspora communities, continues to inflict loss, trauma and exclusion on those people most closely connected with collections. Repatriation requires care, sensitivity, emotional intelligence and patience. It cannot be rushed. Museum staff spent many hours talking, researching, listening, waiting.  Never has the word curator, from the Latin ‘curare’, meaning to care for, watch over, attend, been more appropriate.

As we saw last week, traditional owners engagement with these materials is spiritual and embodied; for them, locked deep within these artefacts is “our lore, our histories, our traditions, our livelihood and our stories”.  Donald Bob, elder of the Gangalidda Garawa nation told us how the first time he saw the sacred items in our stores, he “felt cold, because it was the person of that thing, that “spirit” speaking to him “crying for his home.”

If museums are to reflect the complexity of the human condition and of people’s understanding of the world and each other, we must find space for the spiritual and emotional. Yet, the repatriation debate takes place on the grounds staked out by western rationalism and is framed solely in terms of ownership.

Could repatriation and its associated work also create a context that helps define our sense of global connectedness and even contentedness – when it is needed more than ever? I believe it could and should.

As my predecessor Tristram Besterman (who led on repatriation of human remains 20 years ago) recently discussed with me, ‘this is about building human relationships and what is repatriated invisibly to the source community is dignity, respect and autonomy.  We are in the privileged position to offer more than words and empty gestures, that is the special preserve of museums – we have objects and collections to return’.

This will have a profound positive impact upon the practice, presentation and development of culture, language and traditions for the Ganagalidda Garawa people for years to come. But it will also have a significant, enriching and enduring impact upon our institution, Manchester and its communities.  Last week in Manchester, elders met elders. We brought together three of our finest older citizens to meet with the Aboriginal delegation and what unfolded over the next hour was an extraordinary meeting filled with curiosity, empathy and friendship. This two way process of cultural enrichment and opening up new possibilities of exchange and understanding has just begun. We’ve signed an MOU with AIATSIS to work together over the next 5 years and our experiences will inform and inspire our transformation and new spaces and displays when we reopen the extended museum in late 2021.

At their best, though perhaps all too rarely, museums can be spaces for identity-forming and truth-telling. They can ask “what is the story we tell ourselves about ourselves?”  I believe that repatriation shifts the processes, language and thinking of the past towards a context of possibility and action for the future. Our museums can become places of genuine exchange and learning, reconciliation, social justice and community wellbeing.

In his speech, before the moment of handover, Mangubadijarri Yanner concluded,

“Like us, these objects are of the land – they came from our land, our home. They give my people hope, life, meaning, sustenance and a future.”

What we have realised this week in Manchester, is that through collaborations and actions like this, repatriation offers the potential to give hope, meaning and a future for us and our museums too.

The final words of this reflection should belong to Mangubadijarri Yanner and I hope they inspire other museums as much as they inspire me.

“We thank you for your willingness to embrace the tide of change and open up a new chapter in our history of reconciliation.”