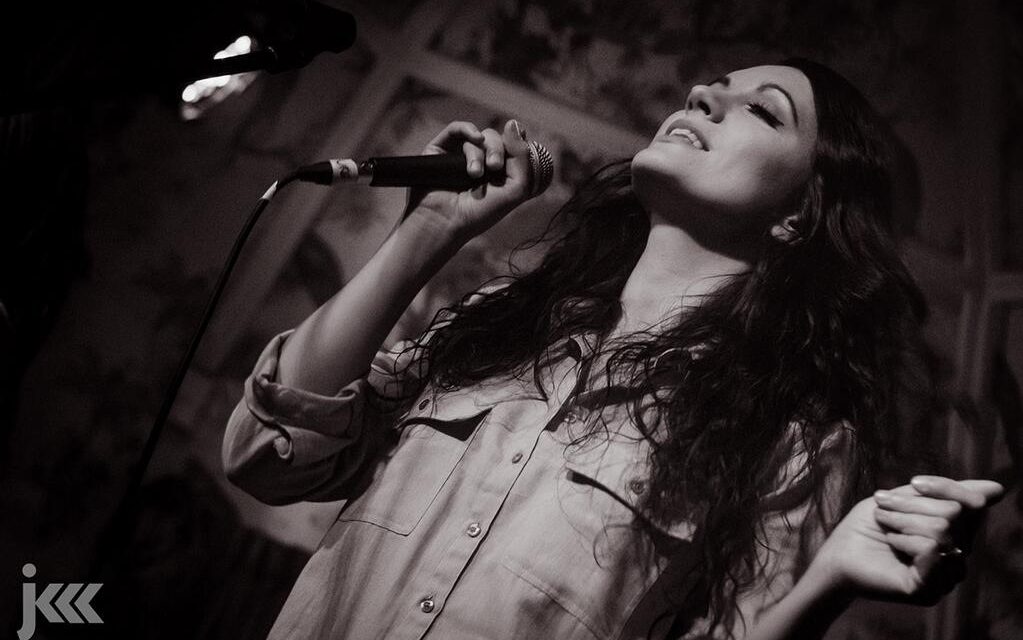 If you are not familiar with Kristyna Myles’ music – you need to be!

We were fortunate enough to attend Kristyna’s album launch at the Deaf Institute and were left in absolutely no doubt as to her amazing talent.

Before the gig started, we caught up with Kristyna backstage to get a few words on her album.

Tell us a little bit about your album.

My album is called Pinch Me Quick and it’s out today – March 10th. I’m very excited about it finally being released because it’s been a long time coming. I recorded it about three years ago with Decca Records funding it initially. It was recorded by Ken Nelson who is a Grammy award winning producer (he did Coldplay’s first three albums as well as Paolo Nutini, Gomez and Badly Drawn Boy). It was incredible to record an album with someone of his stature and also the fact that I got to record the album with my band, who I’ve been performing with since university, it was just an incredible experience, so we have a really good bond and I really hope that comes through on the recording. My favourite song on the album is a track called I’m Not Going Back because it’s all about not going back to a place in your life that was stopping you from fulfilling your full potential, so for me that’s kind of believing that I cannot fulfil a career in music, so this is kind of saying I’m not going back to those negative thoughts and that way of thinking. It’s really special as well because a lot of people have emailed me or facebooked me and said how much the track has meant to them and how it’s made them move on from a harmful or really struggling testing time in their life and that means so much when a song I have co-written has touched somebody.

How would you describe your music?
I would say my music is a blend of pop and soul with a tiny bit of jazz thrown in for good measure. Somewhere in between Joss Stone, Sara Bareilles and Natasha Bedingfield, I think.

Who are your inspirations?
I really love people like India.Arie as she sings and writes about things which really inspire you and I think her tagline is to spread love and light through music and that’s what I hope to achieve as well. She really inspires me. I also love Lauryn Hill. She was one of the first singers I saw – in Sister Act 2! – she was singing Joyful Joyful and at that moment I just thought I really want to be able to do that, to be able to make people feel what I’m feeling now, so I love her. And of course the soul greats like Stevie Wonder and I also love Carole King, who is an amazing song-writer and Sara Bareilles, she’s fantastic too. I love lots of different kinds of music but something which has substance and is influenced by soul music especially inspires me.

Who would you like to collaborate with?
Oooh. There’a s lot of people who are supporting me here tonight at the Deaf Institute who I’d love to work with – Miss 600, who are a fantastic duo from Derby. I also love Sam Gray – I sang backing vocals for him on his album and we did BBC Breakfast together and Loose Women, so I’d love to work with him. And equally Bird to Beast are fantastic as well. There’s such a great wealth of talent in Manchester and I’d love to work with as many as possible who inspire me.

The way you were discovered is almost the stuff of legends. Tell us a little about that.
It wasn’t an instant ‘boom’ you’ve made it. I’m doing my best every day to be the best possible performer I can and to reach as many people with my music as I can but it was a really cool way of getting ‘spotted’. I was busking on the streets of Manchester with my guitarist, Ben Williams, and we just did it after we graduated from Popular Music and Recording at Salford and thought we really want to do music – let’s see if we can earn a living, see what doors open and one massive door opened for a competition called BBC Radio Five Live Busk Idol and we won it, which was incredible because people who were listening to Five Live called in and voted for us. So that really opened loads of doors, and I went on to do a duet with Chris de Burgh, and went around Europe with him, performing to 8000 people a night in arenas – that was an absolutely incredible experience. And I kept on doing as much as I could, signed a record deal back in 2010 and then last January we decided mutually that it was the right time to leave after they had released one single but things had gone a bit quiet and I thought I really wanted to progress with my music and release music, so I took the copyrights back and it’s being released today, which is an incredible, incredible experience.

Your enthusiasm for tonight is very clear.
Yeah, I’m made up that people who I really admire have wanted to come and support me. A lot of them have absolutely massive fanbases and in their own right have performed to thousands of people so to be able to have them come to support me and this gig means a lot.

What’s your favourite thing about performing live?
I love the instant feedback you get from the audience. I know it’s sometimes better to try not to look at people when you’re performing because if you make eye-contact it can sometimes be really off-putting (laughs). I think you can experience the vibe, it’s almost spiritual, you can’t really put your finger on it. Just clapping and getting that instant feedback is amazing. I love recording in studios, but it’s a lot harder because you don’t know how people are going to react, but this way you can find out which songs are their favourite and if a song really means something to someone and they have the courage to come up and say something that’s amazing.

Tell us a bit about your charity work for Centrepoint.
Centrepoint is a fantastic charity who give hope and future to young homeless people. I initially got introduced to the charity because I was invited to perform at their sleepout. I was so bowled over by the work they do that I wanted to raise awareness and funds for them. I went on a busking tour around the UK with my guitarist Ben Williams setting up in different city centres with our caravan battery, inverter and amp and plugging in and performing in front of new people. We also landed the support tour at Kew Gardens opening for the likes of Will Young and Nile Rogers bigging up Centrepoint and inviting people to text their donation to the charity to help with the work they do. I’m proud to be an ambassador for Centrepoint. I’m blessed to have been brought up in a supportive family and always having that support and knowledge I’m welcome at home is something a lot of people don’t have and the reality is that can leave them alone and vulnerable on the streets.