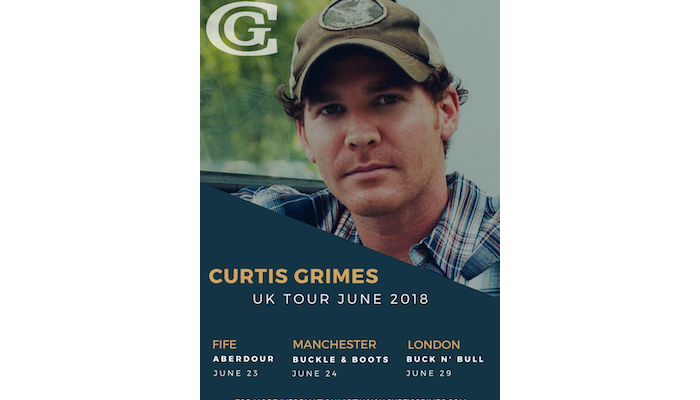 US country singer-songwriter Curtis Grimes has announced his first run of UK dates, including a performance at the Buckle and Boots Festival, Stockport.

Grimes, whose recent single Born To Die became his latest number 1 hit on the Texas radio chart last month, rose to fame among American audiences on season one of The Voice, and has since had over 14 million streams for his original songs, building a career as a national touring artist, headlining sold-out shows and opening for the likes of Aaron Watson and more.

Speaking about coming over to perform in the UK, Grimes commented, “I’m very excited to announce that I will be doing my very first UK Tour this June. This is something we have been working towards and it’s going to feel good to play some country music overseas. Looking forward to seeing you there!”

The singer-songwriter will appear at the Buckle and Boots Festival alongside the likes of Jenn Bostic, The Wandering Hearts, Laura Oakes, Gary Quinn, Robbie Cavanagh, Jade Helliwell, O and O, Izzie Walsh, Philippa Hanna and more.

When does Curtis Grimes perform at Buckle and Boots?