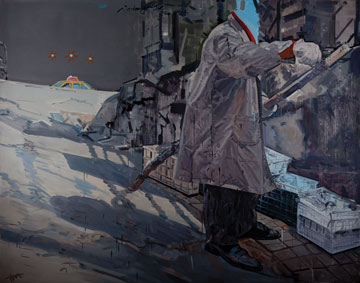 Nie Zhengjie, the winner of the 2012 Liverpool John Moore’s Painting Prize China, has been invited to hold his first ever UK solo exhibition at the Centre for Chinese Contemporary Art in Manchester.

The original UK painting prize (named after Sir John Moores,1896-1993), holds a valuable £25,000 award for first place, with four runners up each receiving £2,500. The competition was first held back in 1957 and has since become the UK’s best-known painting competition. Works from the competition also form an exhibition held at the Walker Art Gallery every two years, which forms a central component of the Liverpool Biennial.

“[The John Moores Painting Prize is] the Oscar of the British painting world”
– Sir Norman Rosenthal, curator and former exhibitions secretary at the Royal Academy.

In 2010, the competition also launched in China, and was co-organised by Shanghai University Fine Arts College, with support from the John Moores Foundation.

Nie Zhengjie, who scooped the first prize in China in 2012, will be the second prize winner to exhibit at CFCCA. He will also be holding a two month residency at CFCCA this summer to coincide with the exhibition.

Born in Yunnan in 1982, Nie Zhengjie studied in the Oil Painting Department at Chongqing University from 2002-2006 and still lives and teaches in Chongqing today. Nie’s winning painting ‘Being’, illustrates the personal narratives of migrant workers in China. It explores the notion of this group of workers, often under-represented in the media, as a key component of the rapid development and modernisation of cities.

Nie’s exhibition, Urban Famers, coincides with the opening of the John Moores Painting Prize 2014 final exhibition at the Walker Art Gallery, as part of the Liverpool Biennial.