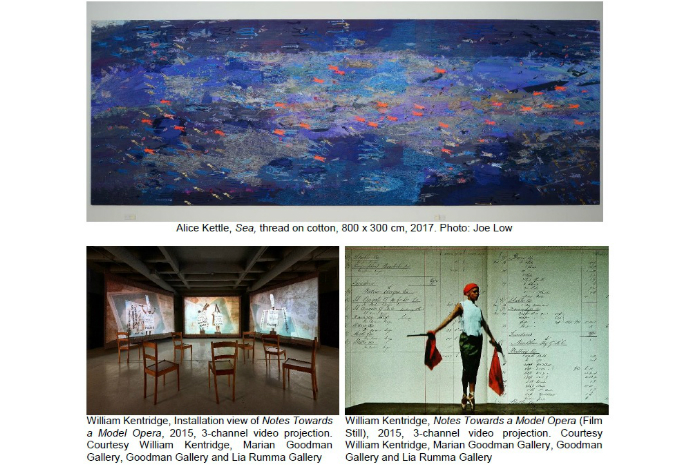 Manchester’s The Whitworth has announced a series of exhibitions and shows for 2018 including internationally acclaimed artists John Stezaker, Alison Wilding and Isaac Julien.

From December collages by conceptual artist John Stezaker will be displayed (1 December 2017 – June 2018). Stezaker’s work draws together vintage photographs, old film stills, postcards and book illustrations to create collages that alter individual images. In the Mask series, glamorous sitters’ faces are overlaid with waterfalls and bridges, producing an appealing yet simultaneously disconcerting outcome. Untitled (Film Portrait Collages) sees photographs of B-movie actors spliced together and other works combine and mirror photographs to subtly destabilise the image. Stezaker has long been innovative in his adaptation of photographic images, majorly influencing the use of collages in contemporary art. The exhibition has been made possible following Karsten Schubert’s generous gift to the Whitworth of twenty collages and a further three collages presented by the artist himself.

Turner Prize nominee and Royal Academician Alison Wilding presents works spanning the past 20 years of her career (16 February – August 2018). This new show at the Whitworth will comprise of three major sculptures, including one from her 1998 series of 16 scenes from The Passion of Christ, gifted to the Arts Council Collection in 2006.  She will also present recent work, Reversing, 2017, a handprinted wallpaper that reworks William Morris’ Acanthus motif asymmetrically, fixing it visually and physically to the wall with a sharp-edged brass sculpture. Alison Wilding studied at Nottingham College of Art from 1967 to 1968, Ravensbourne College of Art and Design, Bromley, Kent from 1968 to 1971 and subsequently at the Royal College of Art, London from 1971 to 1973. She was nominated for the Turner Prize in 1992 and received a Henry Moore Fellowship for The British School at Rome in 1998.

The Whitworth continues its commitment to video art with recent acquisition, Ten Thousand Waves by British film and installation artist Isaac Julien CBE (30 March – 30 August 2018). The 3-screen film is the second in a series of major moving image acquisitions by the Whitworth following Ashes by British artist and Oscar-winning film director, Steve McQueen. Ten Thousand Waves is rooted in the Morecambe Bay tragedy of 2004, in which 23 Chinese cockle-pickers drowned off the coast in northwest England. Shot in China, the film features leading Chinese artists and performers including the actress Maggie Cheung. Combining scenes of remote Guangxi province, historic and contemporary Shanghai and documentary of the Morecambe rescue mission, the film meditates on contemporary experiences of desire, loss and separation in today’s globalised world. Ten Thousand Waves is co-acquired by the Whitworth and The Towner, Eastbourne and is the first acquisition made through the Art Fund’s Moving Image Fund for Museums.

Four Corners Of One Cloth (23 June 2018 – June 2019) presents textiles from the Whitworth collection to explore the importance of cloth across the Islamic World. The title of the exhibition refers to the Prophet Muhammed uniting four clans using a cloth.  A sacred black stone was placed in the centre of a cloth before being lifted at each corner by an Elder from the ground, and taken up to the Ka’ba, a building at the centre of Islam’s most sacred mosque Al-Masjid Al-Haram, in Mecca.  The exhibition is centred around a section of Kiswa cloth, material which covers the Ka’ba and which is replaced each year.

Running from 4 May 2018 until Spring 2019, Of Color explores the part that wallpaper has played int he repetition of ethic stereotypes, questioning how repeating patters can be challenged and disrupted.

Alice Kettle: Thread Bearing Witness launches in September 2018 for a six month run exploring the role of textiles, from domestic to spectacular and monumental.  The exhibition confronts refugee displacement and movement.

Thick Time comes to the Whitworth in September.  The major touring exhibition from South African artist William Kentridge runs 21 September 2018 until 3 March 2019 and brings together six works including two of the artist’s immersive audio-visual installations, The Refusal of Time (2012) and O Sentimental Machine (2015).