In The Frame: Dance On Film 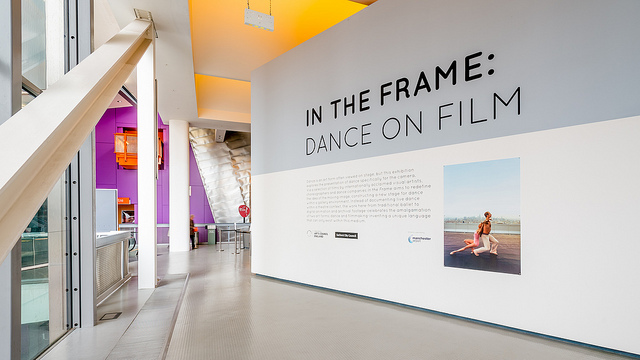 Dance art exhibition at The Lowry.

Whilst dance is all too often confined to the stage, the Lowry is currently presenting an exhibition aimed at presenting dance as an exhibition via the medium of film. It’s an intriguing idea, and one which is well thought through and realised, drawing on a range of styles and contrasting aspects of dance.

The works are specifically created for the camera and have been put together by visual artists, choreographers and dance companies including the likes of the award winning BalletBoyz, Rashaad Newsome (New York based multi-media artist) and Christopher Wheeldon (Olivier Award winning choreographer).

The exhibition has been running since March and is currently set to close on Sunday 27th July, so if you’re a dance fan and haven’t had an opportunity to catch it yet, be sure to make your way over to The Lowry.

BalletBoyz (the award winning company founded by former Royal Ballet lead dancers Michael Nunn and William Trevitt) have contributed three short films (The Clinic, The Estate and Random Alley) which are set to ambient sounds and a musical score. They have choreographed the films.

There is also a 46 minute documentary, Happy to be So, about the lives of Oleg Briansky and Mireille Briane, principal dancers and a duet for more than fifty years. The documentary features footage from the 1950s and 1960s.

1960s and 1970s vogue are also featured in an installation by Rashaad Newsome, in which performers were invited to his studio to demonstrate various styles of the dance, which he used to choreograph a new dance piece which he invited them to perform.

Perhaps the most moving aspect of the exhibition is a feature on the New York City Ballet’s performance on September 12th 2013 on the 57th floor of one of the newly constructed World Trade Towers, in a moving film titled New Beginnings.

In The Frame: Dance on Film is a free exhibition at The Lowry, although a recommended donation is welcome. The exhibition runs until Sunday 27 July. The gallery is open Sunday-Friday 11am-5pm; Saturdays 10am-5pm